You are here: Home / Books To Read / Right to Kill 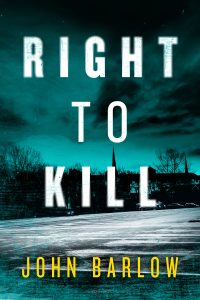 About Right to Kill:

Published in the UK by HarperCollins, this is the debut thriller in a gripping new British detective crime fiction series. Now published as a US edition. For fans of Harlen Coben and Ian Rankin.

They’re guilty, but do they deserve to die?
On a Thursday night in February, Detective Sergeant Joe Romano is following up on the disappearance of drug dealer Craig Shaw. It’s the start of a case that could make or break his career. Because Shaw is about to go from missing to murdered.
While some don’t think Shaw’s killer should be brought to justice, Romano believes every life counts. But he’s running out of time. The killer is ready to strike again. And Romano will be forced to question whether anyone has the right to kill.

Reviews
‘A striking debut. John Barlow’s Right to Kill offers an intriguing plot and a gritty sense of place. I hope we’ll be seeing a lot more of DS Joe Romano in the future’ Peter Robinson, Sunday Times bestselling author of the DCI Banks series

‘An outstandingly good first instalment: the next one can’t come soon enough.’ The Quietus

‘A commercial thriller that highlights hot-button regional and national issues . . . sure to generate conversation’ Yorkshire Post

‘Noir at its most authentic. A gritty, uncompromising thriller, but written from the heart.’ Paul Finch, Sunday Times bestselling author of author of the DS Mark Heckenburg series

John was born in West Yorkshire, and worked as a cabaret musician before studying English Literature at Cambridge University, followed by a PhD in Language Acquisition at Hull University (UK). He worked as a university lecturer before moving Spain, where he now lives, working as a writer, translator and journalist.
His first published work, the novella ‘Eating Mammals’, won the Paris Review’s Discovery (Plimpton) Prize in 2002, and he has gone on to publish fiction and non-fiction with William Morrow and Farrar, Straus & Giroux in the US; and with 4th Estate and HQ/HarperCollins in the UK. Translations of his work have been published in Russian, Italian, German, Spanish, Galician and Polish.
He also worked with the conceptual artists Goldin+Senneby on the ACEPHALE project (2007-15). His writing for this project has been published variously in English, Italian, Spanish, Swedish and Portuguese, and has featured in numerous art shows and galleries around the world, culminating in the novel HEADLESS, based on the project, which was published in 2016 (Triple Canopy, US; Sternberg, Sweden).