You are here: Home / Books To Read / Relative Consequences by Jody Herpin 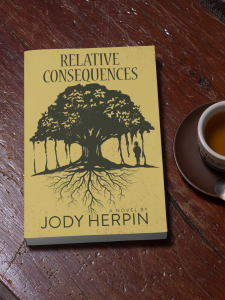 About Relative Consequences by Jody Herpin:

RELATIVE CONSEQUENCES tells the story of Atlanta resident and ex-teacher, Jessy Tate, who is on a mission to find the truth about her past no matter what the cost.

Jessy buries her husband on a chilly day in October 2005. That’s when the nightmares begin again; but this time, the scenery is clear, and the fear is real. However, the puzzle pieces in her head make no sense. These vivid flashbacks reflect what her mind has forgotten—a drama starring a childhood friend and a giant banyan tree set in a time in history when little towns kept big secrets.

Back in 1956, eleven-year-old Jessy hero-worships Eli Blanchard, her hard-working and loving father who owns Aunt Prissy’s Kitchen, a diner that serves the best biscuits in Bonita Springs, Florida. That year, Jessy and her friend, Rita May McAfee, create a clubhouse deep in the roots of a banyan tree. Late at night, on the fourth of July, the two girls witness an evil that will haunt them forever.

As adults, Jessy and Rita deal with their memories differently, causing each one to suffer their own set of consequences.

Jody Herpin, an award-winning author, writes with a southern accent. After all, her roots lie in Georgia. She’s a wife, mom, Grams, animal lover, puzzle solver, painter, and Braves fan. In 2015, she received the Southeastern Writers Association First Prize for Novel Submission for her unpublished novel, Weather Permitting.