You are here: Home / Books To Read / Persuaded by the Hero by Elle E. Kay 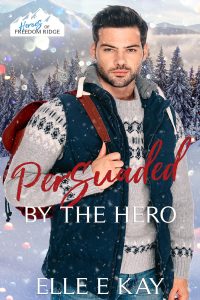 About Persuaded by the Hero by Elle E. Kay:

His decision changed their lives. Her decision will decide their future.

Bryce hasn’t laid eyes on Sabrina in eight years despite visiting Freedom Ridge every Christmas. Not that he could blame her for avoiding him. He left town in a hurry and without a backward glance. He isn’t the same irresponsible kid from back then—the Army changed him. But convincing her to trust him again will be a challenge.

Avoiding the man she’d once loved every Christmas season was one thing, but now he’s back. And he’s her boss. Sabrina isn’t prepared to work for Bryce. Their story might have derailed eight years earlier, but her humiliation feels fresh. Had God rescued her only to throw her back into the mouth of a hungry lion?

They soon discover time apart didn’t dim their chemistry and long for buried feelings rise to the surface, but will they have a second chance at romance or is the risk of involving him in her son’s life too great?

Author Bio:
Elle E. Kay lives on a hobby farm in the Endless Mountain region of Pennsylvania. She is a born-again Bible-believing Christian.

She keeps perennial gardens and enjoys the wildflowers strewn about her property. The wildlife who visit the property are a joy for her, but nothing beats the excitement of a kid being born to one of her many goats.

The Billionaire’s Reluctant Bride was her first book in the multi-author Blushing Brides series, and it was followed by The Bodyguard’s Fake Bride published in February of 2020.

She’s recently released a book for another multi-author series, The Heroes of Freedom Ridge. Healing the Hero released on November 4, 2020. She’s planning at least two more books in this series.

Sign up for Elle’s newsletter for a free copy of Holly’s Noel, release notifications, giveaways, sneak peeks, and more.