You are here: Home / Books To Read / Parched by Anne Joyce 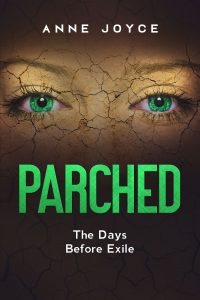 About Parched by Anne Joyce:

It’s the 2040’s and the world has become a more terrifying place than anyone could’ve foreseen. The country is recovering from a devastating nuclear war that has left much of the earth scourged and uninhabitable. Some billion-dollar corporations took advantage of the destruction by purchasing the rights to water and selling it back to the public at ridiculous prices.

Joshua Wyman and Maria Perez struggle to adapt to this new violent world where muggings and murder over water are a common occurrence. The new water barons assign an army of brutes called “Purifiers” to instill order, but when people start mysteriously vanishing, Joshua and Maria begin to wonder if the Purifiers are behind their disappearance.

When Maria receives a frantic email from a friend in danger, she learns of the water barons’ plans for the “indigents” who can’t afford water. She desperately searches for someone to share her dark secret with who might be able to help. When her information falls into the hands of a violent anarchist group, their beaten down, oppressed city must confront what its inhabitants have long since hinted about, but never dared to whisper. Uprising

Anne Rasico (AKA Anne Joyce) was born in a small town in Indiana She composed short stories and comic books as a child and began writing poetry at the age of thirteen. In 1998 she received an Honorable Mention for Literary Excellence for her poem “She Didn’t Come Home.” She attended business school and made the Dean’s List for three consecutive years, putting her love for writing on the back burner. It wasn’t until her mid-twenties that a political post on social networking rekindled her literary flame that has since become a bonfire

In 2013 her novella “When the Chips Are Down” was named a Finalist in the MARSocial Author of the Year Contest. When she is not writing, thinking about writing, or going insane from writing she enjoys camping, fishing and swimming. She is mother to three extremely spoiled cats. Crazy cat lady? Probably