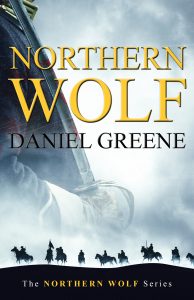 A broken man will be forged in the flames of war…

It is late 1862, and the United States has been ripped apart by civil war for over a year with no end in sight. The war is a distant thought to Johannes Wolf, a young German immigrant with a crippled leg keeping him off the muster lists.

Desperately dredging the gutters for recruits, Wolf cons his way into the depleted, demoralized, and poorly run Union army, and is promptly placed in the undesirable F Company of the 13th Michigan Cavalry.

Wolf’s company find themselves riding with Custer and the Michigan Brigade on a collision course with master horseman J.E.B. Stuart and the Army of Northern Virginia in a small town in Pennsylvania, called Gettysburg.

Will they stand tall against the knights of the South and prove themselves worthy? Or will they fall beneath screaming bullets and sweeping blades, becoming more bloody fodder for a lost cause?

Northern Wolf is a thrilling, historical page-turner packed with detailed passages of battle, the horrors of war, and the struggle to discover oneself. Fans of Bernard Cornwell, Michael Shaara, Simon Scarrow, and Steven Pressfield will be captivated by this powerful new series. Start the adventure today!

Author Bio:
Daniel is the award-winning debut author of The End Time Saga and the historical fiction Northern Wolf Series. Whether it’s a saber charge in the American Civil War or a gun battle between two rival bands surviving a hellish landscape, he is known for his ability to embed every page with fast-paced action. He loves to bring readers into the minds of several characters, building complex and interweaving storylines.

He is an avid traveler and physical fitness enthusiast with a deep passion for history. The works of George R.R. Martin, Steven Pressfield, Bernard Cornwell, and George Romero, have inspired his work. Although he is a Midwesterner for life, he’s lived in Virginia long enough to consider it home.

He is a proud member of the Horror Writers Association.