You are here: Home / Books To Read / New Elbestran: The First Tale of Spanner 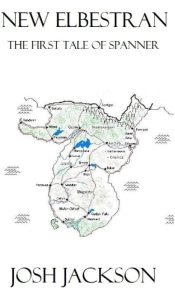 About New Elbestran: The First Tale of Spanner:

More than seven hundred years ago, a man with no memories and unprecedented magical power was found near the construction site of a great bridge – a spanner tenganden. Wandering through lonely centuries without purpose and yearning for an ordinary life, he finds direction in the Elbestran Colonies, a land of settlers struggling under the rule of a tyrannical archduke. In the Elbestran Colonies, Spanner may, at last, find a place he can call home forever.

But when Spanner and his friends engineer a revolution for independence, he discovers that powerful wizards have conspired against him for centuries. Driven by a prophecy that predicted catastrophe at his hands should his life ever find meaning, wizards have worked tirelessly to keep Spanner’s life in obscurity. Now, with his adopted home embroiled in a bitter war for freedom, Spanner discovers the terrible truth that wizards have tried to keep from him for so long. To make matters worse, the father of the woman he loves is the flame-keeper of the conspiracy and will stop at nothing to defeat him.

Now Spanner’s quest is more than achieving his nation’s dream of liberty; it becomes a journey to destroy his real enemies – wizards! Venture into the first installment in the Tales of Spanner series: an epic, high-stakes, sword and sorcery tale of action, intrigue, romance, and betrayal!

Josh is a graduate of Purdue University and a twenty-one-year veteran of the United States Army. He’s an avid storyteller, martial arts geek, sci-fi fan, Transformers collector, and high-functioning autistic. He lives with his wife and family in Tumwater, Washington.