You are here: Home / Books To Read / My Dearest Miss Fairfax 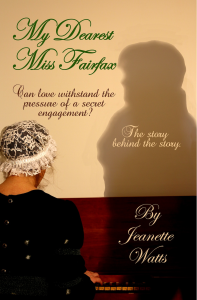 About My Dearest Miss Fairfax:

It is October 1814, and JANE FAIRFAX is attending the wedding of her bosom friend, SOPHIA DIXON. The two girls have been raised together, and mourn their separation. Sophia will be going to Ireland with her new husband, Jane will begin supporting herself as a governess.

Before parting forever, the two friends, plus Sophia’s husband and COLONEL AND MRS. CAMPBELL, take a trip to Weymouth. There, they meet FRANK CHURCHILL. Handsome, charming, engaging, and clearly interested in Jane. The chemistry is irresistible on both sides, and Frank proposes. But there’s a catch: Frank needs the permission of his wealthy AUNT CHURCHILL in order to marry. He asks her to agree to a secret engagement until he can obtain her permission. Jane agrees to the arrangement.

Conveniently, Jane’s AUNT BATES lives in Highbury, the very same town as Frank Churchill’s father, MR. WESTON. Jane visits Aunt Bates, so that the lovers can see each other while awaiting the needed permission. But Aunt Churchill is so sick, she cannot be bothered to talk of matters besides her own health.

Frank eventually manages to pay a call upon his father and his new wife. It allows him to see Jane under the pretext of paying the expected call upon a bride. He takes stock of the situation in Highbury, starts a flirtation with EMMA WOODHOUSE to prevent the residents from suspecting the truth of his engagement to Jane, and sends Jane a pianoforte to provide some comfort while she is stuck waiting for his aunt’s recovery.

Jane miserably waits. She plays the pianoforte, listens to her endlessly-talking aunt, helps care for her grandmother, attends social gatherings. Jane despises the endlessly-gossiping inhabitants of Highbury. She is convinced Emma Woodhouse is a rather stupid person. She fends off romantic overtures from the grumpy and rude MR. KNIGHTLEY. The local vicar returns to town, newly married, and MRS. ELTON enters her life.

Mrs. Elton becomes Jane’s daily torturer. Pushy, ignorant and pretentious, she forces her attentions onto Jane, who finds herself walking and dining frequently with the Eltons. Frank’s return to Highbury to throw a ball, just to be able to get a few dances with Jane, gives her a brief respite from the agony of living among the residents of Highbury, but then once again he leaves and she is alone with them.
Frank manages to get his sickly aunt relocated to a mere nine miles away. While his visits can be more frequent, the lovers still need to preserve their secret, which gets harder and harder to keep. Jane fends off constant offers of help from Mrs. Elton, who insists she needs to be looking for a governess position immediately and insults her endlessly with her claims that Jane is too ignorant to find a place without her help. Jane uses the excuse that she will take no position until Colonel and Mrs. Campbell return from visiting Sophia and her new husband in Ireland. Her rationale falls on deaf ears.

All the various stresses in her life come to a head at a strawberry-picking party. Her ears are tired out by her aunt’s endlessly-wagging tongue, she cannot stand another word of insipid gossip, which is all the Highbury residents know how to talk about. She had written to beg Frank to come and provide a bit of relief from the company of a bunch of people she can’t stand, but he doesn’t show up, and Mrs. Elton finds a very advantageous governess position for Jane, and insists that Jane accept it. At her wits’ end, she leaves the party, only to encounter Frank as she is walking home. They quarrel. The fight continues the next day at an outing to Box Hill, where Frank flirts with Emma Woodhouse and goads Emma into insulting Jane’s aunt. That night, Jane accepts the governess position with Mrs. Elton, and writes to break off the engagement with Frank.

A sleepless night collapses into a full nervous breakdown. Her aunt fussing over her does not help, Emma Woodhouse making overtures, no doubt to try and apologize, does not help. Mrs. Elton bringing remedies and sitting at her bedside does not help. Only Frank’s arrival, throwing himself on his knees in a panic, to tell her his aunt has died and he now can officially propose, apologizing for everything he has put her through since Weymouth, stops her downward spiral.

Jane forgives him, and predictably, the entire town knows the gossip that they are engaged before sunset.

Jeanette Watts has written television commercials, marketing newspapers, stage melodramas, screenplays, novels, and a textbook on waltzing. When she isn’t writing, she teaches social ballroom dances and belly dancing, refinishes various parts of her house, creates Japanese Gardens and raised beds for herb gardens, and sews historical costumes and the occasionally useful thing, like face masks for all her dancers. She is a very poor housekeeper.

She was happily writing historical fiction when she got the idea for her first Jane Austen-inspired novel, Jane Austen Lied to Me. That lead to another work of JAFF, which has now lead to a third – although, this time, it is a combination of both her favorite genres.