You are here: Home / Books To Read / Modern Monarchy: The Caveman King 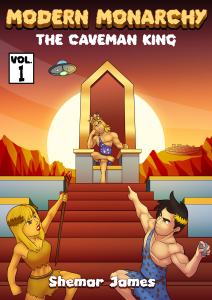 About Modern Monarchy: The Caveman King:

In the era where prehistoric and modern people coexist, darkness infiltrates the Goldleaf Kingdom as it is left vulnerable in the King and Queen’s absence. Determined to defend their castle, the heirs to the throne and their friends must unite an uneasy alliance between primitive and modern people to combat the power-hungry Caveman King and his vicious army who threaten the safety and dominion of their home. They soon realize that he is just the beginning of their coming storm of trouble: ruthless giants, tyrannical aliens, and the Caveman King’s vengeful son, Prince Chad, all threaten their refuge.

From a very young age, creative writing has always been something that Shemar has done in his free time. Writing was a way to explore his imagination and create fantastical worlds, develop fun characters, and craft interesting plots. In elementary school, Shemar recalls journaling numerous pages of funny short stories where his classmates would gather around in anticipation and enjoy the comedic and action-packed adventures his characters would venture on.Being inspired by the television he watched and the video games he played, Shemar wrote and illustrated many stories both on his own and some with other friends. A close friend he rode the school bus with would wait impatiently for him to add more to his story journal so that she could pick up where she left off in the story and enjoy reading with the few minutes she had. He also remembers an older cousin that would come over and read his very early drafts of his published book, The Adventures of Zorax Zoomster and shared with him that “I wouldn’t be reading your stories if I didn’t think they were interesting.” From these moments of his childhood, Shemar knew that he had something special to share.

Several years later, he published his first novel in 2012 called, The Adventures of Zorax Zoomster, categorized as science fiction. This suspenseful fantasy story tells the adventure of a teenage alien crew who journey to the vast galaxy to find a way to save their own civilization from a powerful evil ruler. This was the first official publication that Shemar released in high school at just sixteen years old. Although daunting, Shemar’s ambition to share his creativity with the world far outweighed his fears of doing so.

Shemar didn’t stop there, he also recently published a comic books series, entitled Modern Monarchy: The Caveman King, a fantasy, adventure tale of a princess and her friends of the prehistoric world left to ward off the outside enemies that threaten to overthrow their kingdom while learning to form an uneasy alliance with the modern people of their day. This required focus, commitment, and a lot of patience. Fortunately, Shemar has all three of these characteristics as a storyteller. His most recent publication, is his poetry and short story collection, I.N.S.P.I.R.E.D: A Decade of Imagination & Reflection where Shemar shares more personal pieces of his life from his years in junior high through his time in university and also includes poetry from his parents as well.