You are here: Home / Books To Read / MERCURY DAGGER: A Tale From Kraydenia by Marius H. Visser 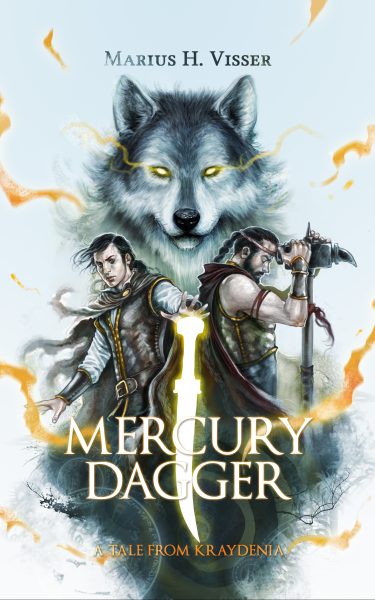 MERCURY DAGGER: A Tale From Kraydenia by Marius H. Visser

Ignorant of the world beyond the walls of Karta, the capital of Kraydenia, young Gordon faces a rite of passage that will reward him with the privilege of being regarded as a man. It has always been a harrowing ordeal, but never like this. Joined on his quest by two others, they find themselves quickly snared by a growing threat ravaging Kraydenia.

Stranded far from his homeworld, Baldrake, the fierce general of the Gar hounds, is shunned from the pack and stripped of his title by the last remaining wolves of Gar. Now, as evil rears its head, he fights alongside Gordon for their name, their honour, and the right to call this new world their home.

With a deep, hidden, tortured past, Malachai not only fights for the land but also the turmoil raging inside him — his warhammer no longer a shiny ornament of obscurity hanging on the wall, but blood-stained and strapped to his back once more.

The companions will have to fight for much more than just Gordon’s cause, as the fate of the world rests in their hands and leads to a mystical journey fraught with danger.

Outclassed and outnumbered, the unlikely band of heroes find an ally who could tip the scales to fight the magic of a powerful sorcerer and the evil forces he commands. But can they trust them?

Author Bio:
A professionally trained Information Technology Specialist Marius H. Visser spent the better part of a decade honing his writing skills and pushing the bounds of imagination after his debut fantasy novel Mercury Dagger – A Tale From Kraydenia back in 2010. When Marius H. Visser is not off exploring the wilds of Australia, he is dreaming up new adventures and monsters to cause chaos in a fantastical world filled with twists, loyalty, honour and great and terrible battles.