You are here: Home / Books To Read / Malevolence – A Hollywood Mystery by Britt Lind 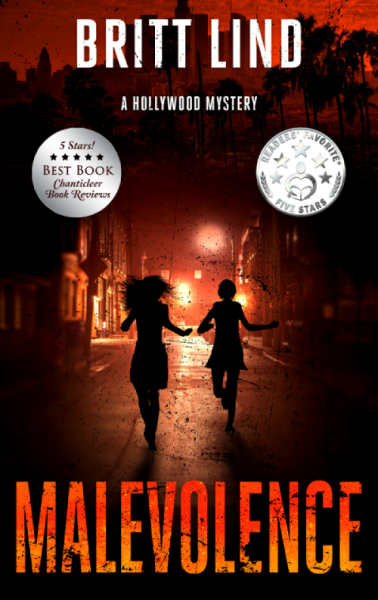 Rosemaria Baker, dedicated homicide detective, has made a major career change and is now a neophyte prosecutor for the County of Los Angeles. She loves the law, loves justice but the true love of her life is the man she investigated and exonerated of murder two years ago, and now lives with, Josh Sibley.

As Rosemaria moves forward with her new job, Josh is also facing major changes in his life. No longer seeking solace in a bottle and barely eking out a living writing commercial jingles, he now is on the cusp of becoming the successful songwriter and singer he dreamed he would become. World famous singing sensation Joell has recorded one of his songs for a movie and will include it in her upcoming album. He seems destined for fame and financial security. His animal soulmate Noor, a black panther he cared for at the L.A. Zoo, and Gilbert, the mountain lion whom he raised from a cub are safely ensconced in a large, wooded wild cat sanctuary. And yet, his heart aches for Sammy the elephant, still languishing in misery at the zoo.

At the same time, Rosemaria faces incredible challenges as she learns the ropes as a prosecutor, deals with a large case load and a superior who has hated her since she was a cop. He makes it clear that he is dedicated to making sure she fails. Although Rosemaria has always been a multitasker extraordinaire, her abilities to do so are stretched to the limit when a prostitute is found murdered in a Beverly Hills hotel. Then two of the former working girls she rescued from the streets of Hollywood become targets of international assassins and run to Rosemaria for protection. But Rosemaria is not a cop anymore and any investigation she attempts is severely limited and discouraged by her former bosses at the Beverly Hills Police Department.

Rosemaria must arrange protection for the girls, continue working her case load at the courthouse, search for answers to the murder and deal with the coworker who seeks to destroy her career. At the same time, Josh is dealing with impending fame and his secret plans for Sammy the elephant. Through it all, their support for one another is unfailing. When it finally seems that some semblance of order is falling into place, Rosemaria faces an unexpected, terrifying threat and she must depend on those who love her to rescue her from certain death.

Britt Lind is an actress, singer and writer who has performed in television shows, movies and on stage in Los Angeles, New York and Vancouver, B.C. She has written several screenplays and wrote and directed a short film titled Obsession. She came in as runner-up in the Washington State Screenwriting Competition for her screenplay A Light in the Forest and won the Beverly Hills Book Awards for her memoir Learning How to Fly. She also won A Best Book Award from Chanticleer and a five-star medal from Reader’s Favorite for her third book Malevolence – A Hollywood Mystery. A Fate Worse Than Death is a Prequel to her second book, Deception – A Hollywood Mystery. All are available on Amazon. Britt lives in Thousand Oaks, California with her husband, Nick Alexander, a screenwriter, and their two feral cats, Toughie and Baby Hughie who used to live a hardscrabble life in the cold and rain in the frozen north and now enjoy a life of luxury in the sun as is their due. Britt is also president of a nonprofit, People for Reason in Science and Medicine, a pro-health, pro-environment, anti-vivisection organization.