You are here: Home / Books To Read / Made in China: A Memoir of Marriage and Mixed Babies in the Middle Kingdom 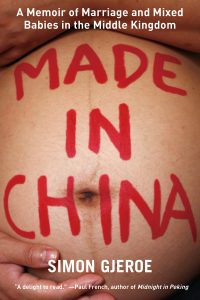 About Made in China: A Memoir of Marriage and Mixed Babies in the Middle Kingdom:

Simon Gjeroe became a father in China and suddenly had to deal with serious questions: Can you live with your wife if she has not showered for a month? Can you take your wife seriously if she starts wearing X-ray aprons? Do you really have to eat the placenta? In this extraordinary memoir, Simon answers all those questions and many more, highlighting the weird and wonderful world of cross-cultural marriage and parenthood in the Middle Kingdom. Made in China is a humorous narrative that reveals Simon’s love for a country wonderfully full of contradictions and absurdities. He went to China as a language student, married the teacher and made both a family and a new life for himself.

Author Bio:
Simon Rom Gjeroe is a self-confessed nerd when it comes to China and everything Chinese. He has been interested in China since he saw the movie “The Last Emperor” as a thirteen-year old. During his Chinese studies, he spent two years at Sichuan University in Chengdu, where he lived from 1995 to 1998. That is where he also met his future wife, Fu. After graduating in Chinese and Modern East Asian Studies, he moved to Beijing for work, and, after a few years, also married and settled down with Fu and eventually became the proud father of two boys here. A fluent Mandarin speaker, he has lived in China for more than a decade. He has written articles and books on Chinese travel, food, culture, history and politics. This is his third book. He now lives in Denmark with his family, now including one made in Denmark. He teaches Chinese Studies and History.