You are here: Home / Books To Read / Lost Weekend in May 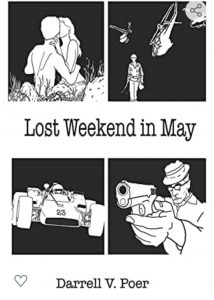 About Lost Weekend in May:

Stuck in Huwabola, Indiana, high school sophomore Tyler Puspoon’s world has turned upside down. His parents are newly divorced, and they worry him to no end. His Dad, a Marine Corps Recon Ranger, is 10,000 miles away, getting shot at in Vietnam while his Mom, Twyla, a CCU nurse, is being wooed by a slaggy traveling salesman who wishes Tyler was old enough for the draft. To make matters worse, the Summer of Love is three years in the past, and Tyler’s afraid the sexual revolution will be over before he joins it. But he’s got an even bigger problem looming. After a weird and wonderful make-out session with Darlene Wantel, who he barely knows, he discovers a wallet loaded with cash and gets kidnapped by a gang of murderous bank robbers while trying to open a savings account. Tyler’s abduction sparks a statewide manhunt by a joint state and federal task force led by FBI Special Agent Carol Kramer, the agency’s second black female agent. After Kramer finally catches the break she needs, she bucks Agency regulations to team with Tyler’s Dad, Major Jack Puspoon, to attempt a rescue and maybe capture the gang.

Author Bio:
Darrell V. Poer is a restless soul searching for something, probably his keys or wallet. He broke out the womb—he wasn’t delivered, mind—before the paperwork was done, and he’s been chasing thrills ever since. As a wee’un, they couldn’t crib him, as a lad, they couldn’t control him, and as a young man, they couldn’t stop him. Now, well beyond those years, and an old man, Marine, and lawyer, Darrell’s drawing on his many misadventures, explaining how, despite predictions otherwise, he avoided serious prison time.