You are here: Home / Books To Read / Lost Treasure of Petersburg 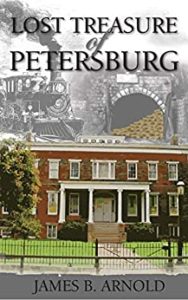 About Lost Treasure of Petersburg:

When workers John Hawkins and Joe Bryant began remodeling work to transform the beautiful and mysterious “Centre Hill House” into the City of Petersburg, Virginia’s own museum, they could not know the treasure, clues, and evidence they would encounter. Before very long, the house would soon disclose a sight unseen for many years. In short sequence, scenes and secrets, held only by a very select few, long dead, individuals would shine one day soon for all to see. Named “Centre Hill Museum”, it sits on top of the highest hilltop near downtown Petersburg. The mansion overlooked the lower half of a mostly refurbished older business district. The Appomattox River, which is a few short blocks away, flows below its stately perch. In those days, the front of such homes were built to face the water, which in this case, was the shipping route into Petersburg. Centre Hill was no exception. Hundreds of men died fighting the Civil War just around the bend from its watch. From the south looking north toward Richmond, the porch offered a sweeping expanse. There, soldiers could monitor General Grants Army for more than a mile, another unintended purpose for the home’s porch during this time.Buried and obscured, a tunnel dug into the side of a hill near the Appomattox River at the North end, found its destination beneath the stately house. As the two old friends and workers worked, Joe’s curiosity and intuition would reveal an extraordinary discovery with a history and drama long buried within the reinforced walls of the secret tunnel. Follow the story of presidents and explorers, of soldiers and protectors, as the plan that was hatched to restore a war-torn young country with millions in gold following the civil war is foiled and rediscovered decades later.

James Arnold is a Petersburg, VA native. Born there 68 years ago, he grew up near the Petersburg National Battlefield where Civil War soldiers fought for more than a year. As a child, he played among those hills collecting relics of bullets, belt buckles, and uniform buttons from both the North and South.

As a young man working for the G.M. Clements Painting and Remodeling Company in Petersburg, he discovered the mysterious hidden tunnel that became the cornerstone for his first book in the Tunnel of Gold series.

The native Virginian became a police officer in Petersburg and spent his career moving about the south, holding ranking positions of Patrol Sergeant, Detective Sergeant, and Police Operations Commander. Later, he became For the City of Isle of Palms, SC and also in South Dakota.

An avid reader, Jim is drawn to authors Clive Cussler, Lee Child, Michael Crighton, and Heather Graham. He is a motorcycle and Hot Rod enthusiast, and he enjoys scuba diving, sky diving, flying, shooting, and writing. An adventurer, he and his wife, Brana, a local attorney, love to travel and have explored the US extensively in the last 20 years, sometimes with their adopted six children, ages 12 to 18. James Arnold also has two children from a previous marriage, ages 34 and 35, and five grandchildren.

Jim Arnold has been interviewed about his police work, appearing on two magazine covers, and highlighted by USA Today during the 1989 Hurricane Hugo and GQ Magazine about a child kidnapping case that was solved twenty years later.