You are here: Home / Books To Read / Lords of the Black Banner by Starr Z. Davies 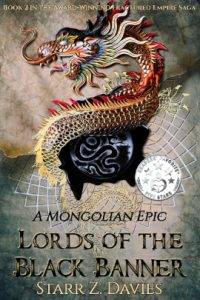 About Lords of the Black Banner by Starr Z. Davies:

In a nation torn apart by powerful men, one woman rises.

Mandukhai faces her toughest challenge yet — carving out her place in a political hierarchy ruled by men. And as the Great Khan’s life hangs on the precipice, the Mongol Lords prepare to raise the black banner of war. Secrets are revealed and dangers lurk in every shadow.

Who will survive the treacherous games of the Mongol court? Will this be the end of Genghis Khan’s royal Borjigin line? And who will end up on top when the dust finally settles?

Lords of the Black Banner is the second book in the award-winning Fractured Empire Saga, based on the gritty, dark, true story of Lady Mandukhai. The series draws you into a world of brutal Mongol steppe life, deadly political games, and the desperate will to survive.