You are here: Home / Books To Read / Let Us Come Before His Presence: 365 Days to Learn, Meditate and Pray from the Psalms and the Sermon on the Mount by Yann Opsitch 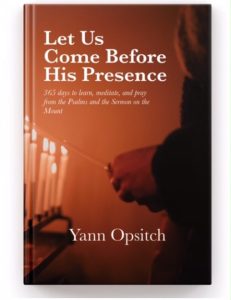 About Let Us Come Before His Presence: 365 Days to Learn, Meditate and Pray from the Psalms and the Sermon on the Mount by Yann Opsitch:

This book helps readers develop the discipline of coming each day before the Lord in a quiet place for the renewal of their faith, hope, and love through the Lord Jesus. Drawing its title from Psalm 95.2 (“Let us come before his presence with thanksgiving”), it contains readings for 365 days of the year, divided into 52 sections (weeks). Each day’s reading includes a scripture from the Psalms or the Sermon on the Mount, focus on a specific topic, a discussion of its meaning, and a prayer. The topics addressed include “Trusting God”, “Nations”, “Parents”, “Babies and children”, “Heaven”, “Angels”, “Being Salt and Light”, “The Narrow Way”.

Born in Versailles France in 1948, Yann got involved in theater and music at a very young age. His father, Glicha Opsitch, had served as an officer in the Yugoslav army and was a prisoner of war in Germany during World War II. His mother Sophie Gallois-Bonnal was the daughter of the French composer and organist Joseph-Ermend Bonnal. She was a professional pianist and piano teacher and assistante of Lazare Lévi for several years.

From 6 to 10 years Yann lived in New York with the painter Frank Mason and his wife Phyllis Mason-Harriman, also a painter. He took his first piano lessons in New York at the age of 7.

Back in France he spent a good part of his youth in Paris.

At the end of the sixties Yann intended for an acting career. He took theater lessons in Paris, including those of Patrick Antoine, and was able to act in a few plays and appear in the cinema.

But Yann had been in spiritual research for a long time. He gradually became interested in the life of Christ and the biblical message. After studying at the North Ireland Bible School (Belfast), where he was a pupil of Jim McGuiggan and other teachers. He was the founding editor of the journal Horizons Chrétiens from 1975 to 1990.

Yann Opsitch is the author of several works in French, including “Paroles du Christ sur la Montagne”, “En Esprit et en Vérité”, “La Sagesse et l’Adversité”, “Le Cœur et l’Invisible”, “Le Dieu de la Création et de la Révélation”. His most recent book in English “Let us Come Before his Presence: 365 days to learn, meditate and pray from the Psalms and the Sermon on the Mount” was published in the United States in November 2021 by Sulis International Press (Keledei Publications).

Yann is married to Rita, the father of three children and grandfather of six grandchildren.