You are here: Home / Books To Read / Just Five Minutes With You, My Son: A Son’s Suicide, a Mother’s Journey 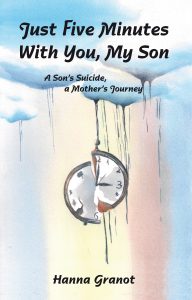 About Just Five Minutes With You, My Son: A Son’s Suicide, a Mother’s Journey:

The mother-writer tries to delve into her son’s soul, who died by suicide during his army service following a romantic breakup. Hanna Granot claims that if she had known back then what the signs were before her son’s suicide, she might have been able to prevent the horrible tragedy.
Hanna aspires to meet and revive her son’s soul on her journey. She takes the reader hand in hand on her surprising life journey, writing from the bottom of her heart, and entering directly into the reader’s heart.
The book shifts between reality and imagination, creating a fascinating and unique plot texture, drawing the reader to identify with her and hold on to her hope and consolation. The stories and poems in the book also fluctuate between a distinct and ever-present loss and a journey to higher spheres where her son’s soul resides. Together, they create a unique blend of encounters. It is not a memorial book.

Hanna Granot worked as a senior director in hi-tech companies for over forty years. Her short stories and poetry have been published in journals and literary anthologies in Israel.
Her young son, Dror Granot, RIP, died by suicide in 2003. It was an event that generated an earthquake in his mother’s life and increased her desire to solve the riddle of his death, writing about it and sharing it.
Hanna describes how she coped with the tragedy and grew from it. Hanna Granot has been helping other bereaved families and volunteers in suicide prevention programs for the last twenty years.