You are here: Home / Books To Read / Journey to Jumbalot by Ryan Wakefield 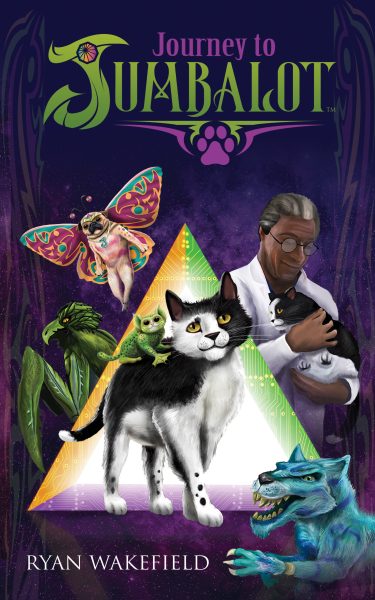 Journey to Jumbalot by Ryan Wakefield

A glowing doorway. A lost friend. Will one loyal pet turn out to be the hero of the hour?

Alby the housecat has no desire for adventure. Rescued from the street by the kindly Professor Wizoom, he’s grateful to be safe and lazy. But when his master vanishes through a magical door, the scaredy-cat summons what little courage he has and races in after him.

Stuck in a strange land of mixed-together animals, Alby teams up with an irritating froguar to locate his missing owner. But when he’s mistaken for a spy, the lonely feline finds himself caught in a war between wolvaraptor pirates and noble tigeroon knights!

Can the timid feline conquer his worries in time to save the day?

Journey to Jumbalot is an award-winning, action-packed fantasy novel for young and old alike. If you like talking animals, daring deeds, and enchanted worlds, then you’ll love Ryan Wakefield’s illustrated quest.

Ryan Wakefield has worked primarily as a graphic artist for the last 20 years, but he always dreamt about creating a fantasy world young readers can escape to. Since grade school, he was fascinated with animal hybrids. He loved the idea of blending two or three animals together to create a magnificent new species. This fascination and his love for fantasy inspired him to fulfill his lifelong dream to breathe life into a new world middle grade readers can explore – Jumbalot.

He’s also the proud co-parent of a silly pug named Lily, and a sometimes difficult feline named Rocky. The book’s protagonist, Alby, is based on Ryan’s first pet: an oversized black and white housecat named Albert. The only thing larger than Albert’s appetite was his heart and he is sorely missed. Also, the character of Queen Lola was based on his wife’s first pug named Lola. Sadly, Lola recently succumbed to poor health and will also be deeply missed.

Ryan and his wife encourage everyone to open their hearts and their homes to adoptable pets.