You are here: Home / Books To Read / Jessica’s Footprints 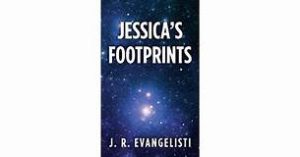 Evidence supporting aliens visiting Earth is being released in a government report shortly. Extraterrestrials are amongst us and have been for eons. Roswell, atmospheric ionic transgression, electro kinetic propulsion, exceeding the speed of light are touched upon in this Science Fiction mystery novel.
A seventeen-year-old girl named Jessica involved in an archeological field trip finds footprints left 20,000 years ago in Australia.
Twenty years later Jessica’s life has changed as government scientists, and a former colleague fiercely believe extraterrestrials left the footprints, but Jessica now a doctor, disagrees with the scientists. She faces hostile crowds while on tour across the country explaining her reasoning. Jessica lecturing during the holiday season in Roswell, New Mexico, forms a friendship with a single woman struggling to raise two adopted children. Jessica begins to exhibit hallucinations and odd behaviors in Roswell. It turns out there are powerful forces that want to silence the truth behind Jessica’s discovery. Set during the Christmas season, your life and all children’s lives will change forever as well the understanding of the Universe.

J. R. Evangelisti has written in a variety of genres, to include comedy, mystery and science fiction (post-apocalyptic dystopia).