You are here: Home / Books To Read / Is the Bible Really Your Word, God? by Kathy Morgan 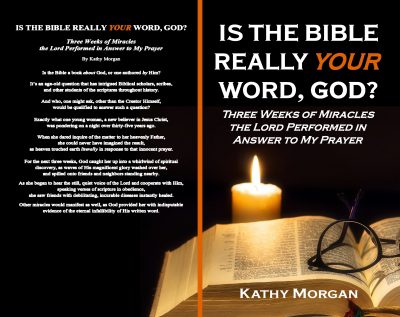 Is the Bible Really Your Word, God? by Kathy Morgan

IS THE BIBLE REALLY YOUR WORD, GOD? Three Weeks of Miracles the Lord Performed in Answer to My Prayer: A Christian Revelation on the Mysteries of Heaven’s Miracles, Signs, and Wonders that Follow them that Believe

Is the Bible a book about God, or one authored by Him? It’s an age-old question that has intrigued Biblical scholars, scribes, and other students of the scriptures throughout history.

And who, one might ask, other than the Creator Himself, would be qualified to answer such a question? This is exactly what one young woman, a new believer in Jesus Christ, was pondering on a night over thirty-five years ago.

When she dared inquire of the matter to her heavenly Father, she could never have imagined the result, as heaven touched earth literally in response to that innocent prayer.

For the next three weeks, God caught her up in a whirlwind of spiritual discovery, as waves of His magnificent glory washed over her and spilled onto friends and neighbors standing nearby. As she began to hear the still, quiet voice of the Lord and cooperate with Him, speaking verses of scripture in obedience, she saw friends with debilitating, incurable diseases instantly healed.

Other miracles would manifest as well, as God provided her with indisputable evidence of the eternal infallibility of His written word.

This short 56-page read is an explosive testimony about one woman’s unexpected encounter with the supernatural power of Almighty God.

Get This Religion Book From Amazon.

Combining her love for travel with writing and all things Irish, Kathy packed up a few years ago and moved to Galway City, Ireland, where she lived for six years. While there, she opened a dinner theater restaurant and enjoyed writing and producing murder mysteries for her diners.

Through the years, life took her on a wide and varied journey, including the experience she highlights within the pages of the book mentioned above. Her first paid publishing experience was an interview with Mick Jagger of the Rolling Stones when she was fourteen years old. And for almost two decades, she served as the Founder and Executive Director of a national charity for missing, abused, and exploited children and suicidal teenagers, penning articles, training manuals for professionals, and other materials in her work there, as well as her role as an adviser to the U.S. Justice Department, the American Bar Association, and the White House. During that time, she made many media appearances, including The Today Show, CBS Evening News, CNN, The 700 Club, and a host of other local and national television outlets.