You are here: Home / Books To Read / Invasion 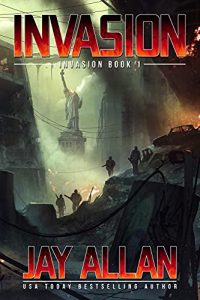 The future. It holds all sorts of positive potential…technological advances, increased life expectancy, improvements in society. But there are negative possibilities too, and perhaps the worst of these is the arrival of an alien race…not just anyone, but a hostile one, intent on conquering humankind.

Hugh McDaniel lives in Queens, New York. He is a genius, and he has been struggling to pick one area to focus his life’s work on. His brother and best friend, Travis, is a Marine officer. They get along very well, despite the differences in their lives, but when the aliens suddenly invade and destroy their entire culture, they are forced to struggle in the ruins, at first just to survive, just to find basic food and medicine. But soon, they set their sights on more…on resistance, and on reclaiming their planet from the invaders.

The path is a long one, and almost impossibly difficult, but they begin their journey, finding other survivors and searching for food, medicine…and weapons. The enemy does not remain silent for long, and they start sending missions into the ruins, seeking to gather the humans, to carry them off for whatever purposes they have. Hugh and Travis lead a constant battle, a fight against the enemy that will not end, that cannot end, until only one side remains.

The aliens send more and more robots to New York, and the McDaniels and their followers dig in to resist viciously. But amidst the almost constant fighting, they also mount their own mission, to seek out and explore, to determine what it is the enemy truly wants.

The invaders finally launch a massive attack, large enough to utterly destroy the humans in New York, but Hugh has a forlorn plan, a way to, just maybe, defeat the assault. But while he is frantically preparing his crazed operation, Travis is leading the desperate mission to find the enemy, to discover what they really want. And when he does, it is more terrible than anything he had ever imagined. He tries to return home, to bring the news to everyone that the engagement between humans and aliens is absolutely a fight to the finish, that surrender isn’t even a possibility. But will he even have a home to return to?

Author Bio:
I’m a lifetime Northeasterner, and I currently live in New York City, where I write from my apartment…and continue to fill small notebooks with ideas for future books. I’ve been reading science fiction and fantasy for just about as long as I’ve been reading, so, of course, when I started to write, that’s where I ended up. It’s been a great ride so far!

My tastes as a reader are fairly varied and eclectic, but I’d say my favorites are military and dystopian science fiction, space opera, alternate history, and epic fantasy, usually a little bit gritty. I also read a lot of non-fiction, mostly history. I write a lot of science fiction with military themes, but also other SF and some fantasy as well. I like complex characters and lots of backstory and action. Honestly, I think world-building is the heart of science fiction and fantasy, and since that is what I’ve always been drawn to as a reader, that is what I write.

Among other things, I write the bestselling Crimson Worlds series and the Far Stars series published by Harper Voyager.

I’ve been an investor and real estate developer for a long time (mostly retired from it now), a fiction author more recently. When I’m not writing, I enjoy traveling, running, hiking, reading. I love hearing from readers and always answer emails. I think you stop growing as a writer if you stop listening to those who read your books.