You are here: Home / Books To Read / Infinite Stakes: A Novel of the Battle of Britain 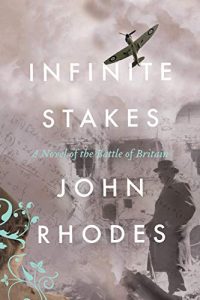 About Infinite Stakes: A Novel of the Battle of Britain:

1940: Hitler’s aerial assault on England reaches a crescendo on Battle of Britain Day when, against all odds, the Luftwaffe is turned back by the outnumbered pilots of Fighter Command.

Infinite Stakes—picking up where Breaking Point left off—puts you both inside the cockpit as the pilots duel and at RAF Headquarters with Winston Churchill on that fateful day and through the year that follows, when Britain must fight on alone.

Johnnie Shaux, a battle-hardened fighter pilot, now leads a squadron of brave American volunteers against superior forces until he is forced down and imprisoned as a POW.

Meanwhile, Eleanor Rand, a brilliant mathematician, is tasked to predict Hitler’s plans and to help persuade America to join the war.

Written with historical accuracy and page-turning speed, Infinite Stakes takes you to diplomatic conference tables with Churchill, Roosevelt, and Stalin, to desperate battles over France, and, finally, on another fateful day, to Pearl Harbor.

Author Bio:
John Rhodes was born in World War II while his father was serving at an RAF Fighter Command airfield in southern England. After the war, he grew up in London, where, he says, the shells of bombed-out buildings ‘served as our adventure playgrounds.’ Rhodes graduated from Cambridge University where he studied history. After a career in international banking, he retired to Wilmington, North Carolina. He has written two (so far) Thomas Ford detective novels and is busy on a sequel to Breaking Point.

John’s love of history informs his fiction. ‘History is not just something to read about; it has to be felt and touched,’ he says. For example, drawing at random from his wide knowledge of English history, he says one cannot understand Elizabeth I, and her decision to remain a virgin (at least officially,) without visiting Kenilworth Castle in Warwickshire and walking in the garden in which the Earl of Leicester tried (officially unsuccessfully) to seduce her.

John rues the decline of history as a required field of study. ‘If you don’t know where you came from, you don’t understand why you’re here, let alone where you going to be next.’

Reflecting John’s search for historical accuracy, the battles in Breaking Point conform to the actual performance specifications of the aircraft, down to the details of their rate of climb and turning circles. He believes there is a difference between historical fiction, in which the reader is presented with a combination of factual information and imaginary fiction; and fantasy, in which the reader knows that what he/she is reading might be fascinating but cannot be true.

John grew up in an era when reading was still a major pastime, and he inherited a love of old-fashioned detective stories from his father. His favorite authors were, and still are, Agatha Christie, Ngaio Marsh, Josephine Tey, Margery Allingham, and in John’s words, the ‘immortal Dorothy L Sayers.’ Sayers’s fictional protagonist Harriet Vane is, John confesses, an archetype for his character Eleanor Rand in Breaking Point. It is extraordinary, he thinks, that it was this remarkable group of women, writing in the early and mid-20th century, whose works defined and exemplified the art of the British cozy, combining intellectual and literary skills of the highest order.

After many years living on the West Side of Manhattan, he now lives in Wilmington, North Carolina. ‘My traveling days are over,’ he says. ‘Now I have the luxury of writing every day.’