You are here: Home / Books To Read / In The Name Of 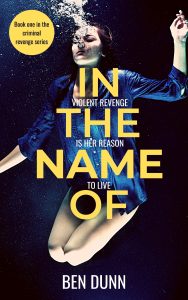 About In The Name Of:

A fast-paced crime Thriller in the tradition of Lee Child. In The Name Of

A woman returns to London looking for revenge and a way to die. Crawling back into the world of organised crime her murdered husband left behind, she seeks those that killed him and a chance at redemption. She faces childhood demons and past loves on her violent way to finding peace for her own misdeeds.

He wants a way to ease into death. His past is violence, his present is hurt and his future leads only to destruction. He owes a debt to people he loved. A meaning to exist comes from his murderous past.

In The Name Of by Ben Dunn: unforeseen revenge and redemption REVIEW simplygoodbooks.co.uk

A driven woman returns to avenge her husband’s death. An old flame endures brutality and unrequited love. Together they face a terrifying ordeal of life or death.

In The Name Of introduces us to two most unlikely heroes, or should I say anti-heroes. Charlotte, a slender but lethal woman driven by the need for revenge. Raucous, a battered, defeated, violence-for-hire nobody, whose greatest assets are his stubbornness and his ability to take a beating like no one else.

Characters’ inner lives
What I particularly admired about this book was the wistful, regretful, yearning tone of the writing which elevates the story out of the formulaic. We see into the minds of the characters and the alternating voices of Charlotte’s and Raucous’ perspectives gives us a painful insight into their lives and motivations.

In other novels, Raucous would simply be the stupid muscle in the background, taking orders to administer pointless violence. Here, we meet a character who would still repel and appal us, but by glimpsing his inner life we see the man inside wrestling with a decision to attempt the greater good.

Writing a female character administering violence is often a tricky one. So many female characters become one-dimensional, unscrupulous villains. By revealing Charlotte’s thoughts and motives this is avoided, and we feel her doubts and pain, as well as her obsession.

Despite the bleak, hopeless prospects facing the unlikely alliance of Charlotte and Raucous, with seemingly no way out of their doomed situation, they never give up. The plot unfolds gradually and builds the tension cleverly. It’s an unusual but satisfying story.

I would recommend In The Name Of to those of you who enjoy fairly raw crime fiction with a human element, provided skillfully through insight into the characters interior lives. It’s not Miss Marple but its much more sophisticated than the ‘shoot-em-up’ genre.

Ben Dunn is a crime fiction writer, SEMH school science teacher, and single father. Having spent most of his adult life in foreign lands, experiencing everything non-British in the most British of ways, he returned to the UK with his two teenage daughters. They settled in Lincoln, a place he couldn’t have pointed out on a map until weeks before his arrival. Taking the year to train as a teacher, his down time was spent putting together a story for the characters he had created over the years. “In The Name Of” is this story. The first in a series with the second under way.