You are here: Home / Books To Read / Imbalance 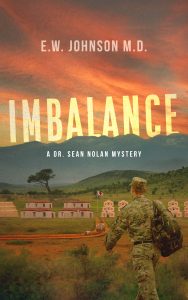 Imbalance is the fourth Dr. Sean Nolan mystery. When a young reporter stumbles onto a story involving a designer drug linked to a privately owned pharmaceutical company, his investigation is suddenly blocked by federal authorities. He turns to Dr. Nolan for help, but the federal involvement is a flashing red warning light. Intrigued by the case, Dr. Nolan wishes the young man good luck, but refuses to be drawn into the situation. When the reporter vanishes without a trace days later, the guilt at not helping becomes an unbearable burden. Now all he needs to do is track down the reclusive billionaire owner of Geneteer Pharmaceuticals somewhere in Africa. What could possibly go wrong?

Author Bio:
After practicing medicine and caring for a small town in southwest Washington for thirty-four years, a career change occurred at the end of 2018. Now writing full-time, ten novels have been penned since moving to the Big Island of Hawaii. Most of the books have featured the Dr. Sean Nolan character. A reluctant detective and totally lacking in any super-hero skills, he is guided by a very simple set of rules: there is right and wrong, and when it comes to finding answers, there are no rules.