You are here: Home / Books To Read / Illumina 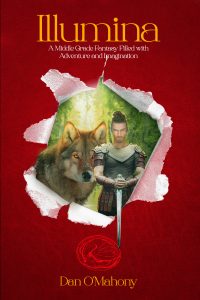 There’s nothing more powerful than a good story.

Twelve-year-old Ronnie Jackman has gone through something no child should ever have to face. Not only did he lose both of his parents, but he watched them die in a raging fire.

His pain runs deep and there is no telling what would have happened to him if he didn’t meet Mr. Griffin, a mysterious substitute teacher who helps Ronnie tap into a wellspring of imagination that was waiting inside of him. Mr. Griffin inspires Ronnie to write fantasy stories, where he casts himself as the hero and creates a powerful foe that serves as the target for his grief and guilt over his parents’ deaths.

Ronnie revels in his newfound ability. But there comes a point when it appears his imagination is literally starting to get away from him. The line between writer and story begins to blur, and characters from Ronnie’s stories start appearing in the real world.

Ronnie must learn to control his imagination. If he can, he stands a chance of becoming the hero he wants to be in real life, as a tragedy erupts at school that threatens the life of one of his new friends.

Pick up a copy of Illumina today and experience imagination fully unleashed.

The man known as Dan O’Mahony was born in a library and raised by a pack of wild fantasy novels who brought him up as if he was one of their own.