You are here: Home / Books To Read / HUSH II: Breaking the Cycle of Silence Around Sexual Abuse by Tenita C. Johnson 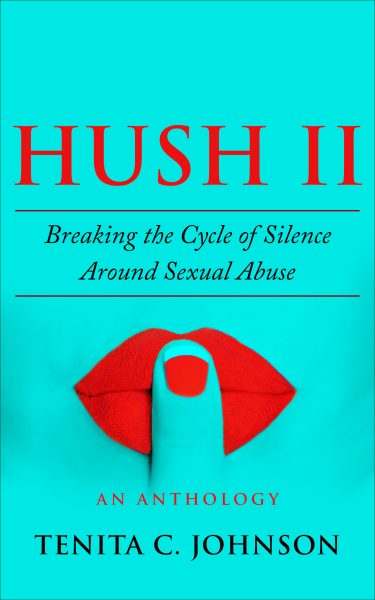 For many families, it’s the elephant in the room everyone chooses to ignore. It’s the one thing no one talks about at the family reunion or the backyard barbecue. Like a cancer, it oftentimes lies dormant under the surface until it is triggered and simply can no longer be ignored—by the victim or the predator.

Sexual abuse has been—and continues to be—a silent killer in our communities. While it may not kill someone physically, it has certainly killed years of joy and happiness, let alone one’s peace. In a moment, it has killed the hopes and dreams of many whose lenses of life are now tainted forever. Oftentimes, because of the shame and the guilt, the hurt and the heartache, the voices of victims have been silenced for too many decades to count. In this candid literary masterpiece, eight brave women share their story from trauma to triumph over molestation and/or rape.

And it’s time to break the cycle of silence.

Get This Memoir Book From Amazon.

Transforming pain into purpose is a gift that authorpreneur, speaker and book coach, Tenita “Bestseller” Johnson gives to everyone she encounters. She is a warrior of words with a fierce passion for guiding authors to expand their brand by showing them how to earn multiple streams of income from just ONE book. As the author of 18 books, seven of which have been Amazon bestsellers, she is living proof that sharing your story leads to your destiny.
Familiar with rising from numerous fires and coming out unscathed, Tenita has triumphed over suicidal thoughts, depression, low self-esteem, marital storms and blended family woes. She has also endured miscarriages and the still birth of twins the day after she married her husband. Each of these tragedies has added indelible layers to her resilience. With more than 25 years in journalism, writing and editing, she has a knack for creating narratives that are authentic and raw, yet endearingly relatable. She is a vessel with the ability to change lives and impact the world, thus she is a proud “book bully,” who relentlessly urges others to, “Write the book and get paid for the pain!”
When Tenita speaks, people listen with their ears as well as their hearts and souls because her transparency transcends pretense. She is a bold beacon of hope who inspires others to seek their highest peak. One of her proudest and defining moments was her appearance on Kirk Franklin’s Praise Sirius XM channel.
As the founder and CEO of So It Is Written Publishing, she has helped hundreds of authors birth their books in record time. The 12-year-old company excels as a one stop shop for the complete book process from conception to completion, not just editing. The editorial guru successfully helps people to pen books that will boost their brand, accelerate their paydays and bust open doors of endless opportunities. So It Is Written won The Sunrise Pinnacle Award for Diversity Company of the Year, in 2020, from the Rochester Regional Chamber of Commerce in Rochester, Michigan. For six years, Tenita hosted the Red Ink Conference in Atlanta, Detroit, Charlotte and Chicago. Over 600 attendees received invaluable information from industry leaders on how to write, edit, market and publish their next bestseller.
Beyond her books, her versatility shines in multiple areas, including her role as the executive producer of the hit stage play, When the Smoke Clears, which was based on her book, When the Smoke Clears: A Phoenix Rises. The play ran in 2017 and 2018 to sold-out audiences in downtown Detroit. She also served as the editorial director for Career Mastered Magazine and Hope for Women Magazine. Currently, she is the national president of The Aspiring Writers Association of America, a writers’ organization that works with writers worldwide to pen their next literary masterpiece.
Tenita’s passion for delivering bestselling books is matched only by her devotion to helping women and men heal from the drama, trauma and baggage of sexual abuse. Her 2021 anthology, HUSH: Breaking the Cycle of Silence Around Sexual Abuse, features eight women who lost their innocence and identity to life-altering trauma. She is a huge advocate and mouthpiece for those who have been sexually abused as she empowers them to release their pain instead of suffering in silence.
Her future plans include the release of HUSH II, producing her short film What Happens in This House, and completing the script for her feature film When the Smoke Clears. As a catalyst for positive change, she is a woman who has learned to live an intentional life of purpose while unapologetically fulfilling her God-driven assignments.
For booking or speaking engagements, email info@soitiswritten.net.