You are here: Home / Books To Read / House of Darkness by James Ostby 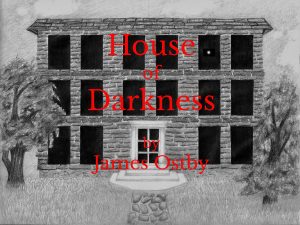 About House of Darkness by James Ostby:

House of Darkness is a literary novel that tells the story of the life of Jonathan Gorgious in Victorian England. Also featured are Simon Slope, Maxwell Backbone, Uncle Thurston, sailor Jack Blevins, and various other characters of some distinction.
Jonathan is the son of a farmer and former pugilist, Elbert, and a beautiful mother, Cordelia. Early in his life Jonathan falls in love with a schoolmate and neighbor, Phebe Moss. They are bound together for life.
As Jonathan and Phebe’s fortunes unfold they face everyday trials and challenges with intelligent resolve. Jonathan inherits a shipping business from his uncle Thurston; Jonathan and Phebe have two daughters, Marie and Rose; Marie leaves home for years and leads a life of dissipation; Jonathon sails to Italy as a common crewmember on one of his ships. Somewhat to his surprise Jonathan finds himself immersed in his own personal philosophy, and he is afflicted with mental disorders.
In the end …, and Jonathan lives a reclusive life in his House of Darkness.

Buy the book, and follow the author on social media:
Learn more about the writer. Visit the Author’s Website.

Author Bio:
﻿ James Ostby grew up on the barren High Plains of northeastern Montana, on the farm homesteaded by his grandparents in 1912. He holds a bachelor of science degree in general studies, a bachelor of science in film and television production, and a minor in history. He was a personnel psychology specialist in the Army in the mid ’60s, has worked in public and commercial television, and was the owner and manager of a small-town radio station in Wyoming. He and his wife and their two young daughters returned to the farm in 1977, where the long, cold winters and the isolation provided the perfect environment where he wrote as an avocation.
James and Donna are retired, and after spending their winters aboard their bluewater sailboat based in Georgia for fifteen years, they are living full-time at their farm/ranch in northeastern Montana.