You are here: Home / Adult / His Safe Haven 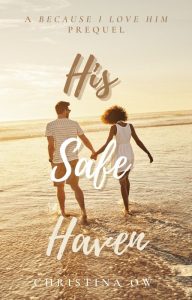 About His Safe Haven:

A Because I Love Him prequel. The love story before the messy breakup.

Talia McKenna just wants a signature on her proposal, and she’s tired of jumping through hoops to get it. But what choice does she have? In comes Rafael DeLuca II, her bosses’ boss and her way out of dodge. His signature is all she needs to end this cat and mouse game, but things get complicated when her bosses have her spy on him in exchange for the green light she’d been chasing. But Talia isn’t stupid and Rafael DeLuca isn’t that simple of a man.
Rafael DeLuca II wants a break from his life after an almost public panic attack, hence the surprise visit to his company’s office in Boston. An ocean away from Italy where his problems reside. He meets Talia McKenna, his secretary and most honest spy he’s ever met. She proves to be a distraction that he doesn’t want, but finds he needs. Too bad she isn’t game for some bed sport. But Rafe isn’t known to be a quitter.

Author Bio:
Christina OW writes suspense, thrillers, erotica, interracial and multicultural romance books. She is the author of Contemporary, Fantasy, Paranormal, Regency Romance books and a poet of several titles. She loves reading novels that take her on a ride of wild emotions. Books have always been an escape for her; for a few hours she gets to live the lives of characters she grows to cherish and admire. She’s always had an active imagination and because of it has lived in her head more than she has been in the outside world. She always imagined scenarios and wondered how they would turn out in the end, and what kind of emotions they would invoke. Thus began her writing career.
Her books are published on Amazon and on ereaders Readict, Novel Sky, Novel Cat, AnyStories and URead