You are here: Home / Books To Read / Hidden Intentions 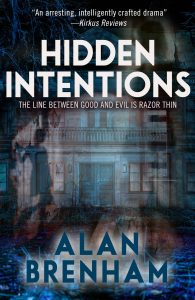 A teenage girl sneaks into an old abandoned house on a dare, but her mission quickly goes sideways. Bound and whisked away, a terrified Cailey relies on her own resourcefulness and extraordinary bravery to find ways to survive. She escapes, but her kidnappers are close on her heels. That’s when she has to decide what she must to in order to stay alive.
Her parents experience their own torments. To satisfy the kidnapper’s demands, her father is forced to make an impossible choice. His daughter’s life or that of another. He has seven days to do it. Realizing time is running out, Cailey’s mother decides that the only to save her daughter is to risk it all.
The line between good and evil is razor thin . . .

Author Bio:
After graduating from college, Alan spent several years as a criminal investigator before earning a law degree, working first as a prosecutor then as a defense attorney for over twenty years. His professional travels for the US Government took him to several European and Middle Eastern countries. While contracted to US Army, he resided in Berlin, Germany, for a few years. Under the pen name of Alan Brenham, he’s published five crime fiction novels with Black Opal Books. My wife, Lt Colonel Lillian (LTC, Ret., US Army), and I currently live in the Austin, Texas area.