You are here: Home / Books To Read / Heir of Magic by J.D. Ruffin 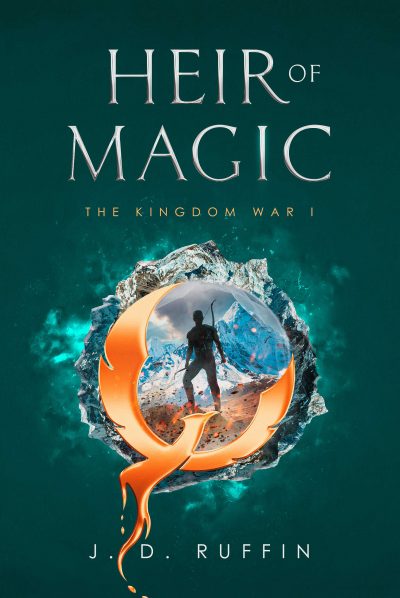 Heir of Magic by J.D. Ruffin

She’s been dead a thousand years. She’s angry. And now she wants her throne back.

Irina was a powerful Mage who tried to crush the nations under her iron fist, only to be thwarted by the selfless sacrifice of magic’s guardian. A millennia later, her cult of fanatics plots to bring her back.

When magicians go missing, Guardsman Keelan Rea is charged with bringing the victims home. His gift of Truthreading made him the nation’s top investigator, but this search tests even his skill. The hunt gets personal when a woman he cares for is taken. The kidnappers’ trail leads Keelan across the border where he finds a trusted neighbor massing troops for a surprise attack.

A thousand miles away, Princess Jess Vester is destined for the throne. In her heart, duty battles love. When her mother tries to marry her to an obnoxious backwater Duke, she chooses her boyfriend over the Crown and flees the capital. The same masked men taking magicians now haunt her trail, threatening more than just her freedom.

Time is running out for Keelan to save the magicians and stop a war, and for Jess to save herself.

And if the cultists succeed and Irina rises again, the world will fall.

Author Bio:
J.D. Ruffin is the author of the acclaimed, action-packed Kingdom War series, an epic fantasy launched in 2021.

J.D. was born in March 1970 in Nashville, Tennessee, and never really enjoyed reading until a friend loaned him a dog-eared copy of J.R.R. Tolkein’s Fellowship of the Ring. From that day, he was hooked, discovering fantasy authors Robert Jordan, Brandon Sanderson, R.A. Salvatore, Terry Goodkind and many, many others. Not long after, Brad Thor, Vince Flynn and a host of other thriller/suspense writers entered the picture and captured his imagination.

As a fourteen-year-old nerdy boy, J.D. and his friends would gather around the D&D dice for hours on end, trading reality for fantasy, if only in their minds. In his quest to “stump his friends” with an impossible campaign, he dreamed up a storyline that captured his imagination. Then… well… nothing happened. He grew up and went to work in a completely different world.

Too many years later, that story he dreamed pulled at the corner of his mind, demanding to be heard… to be written.

Hence, an author was born.