You are here: Home / Books To Read / HEIMAT by Paul Marzell 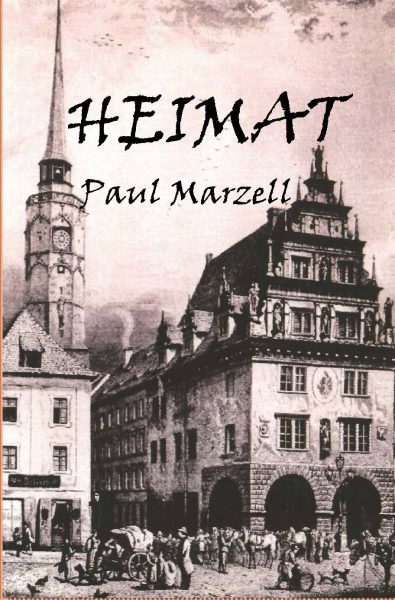 Matthias Schmidt left his Heimat, Neisse, Germany in 1929 for a better future in the US and leave Germany’s post-World War One economy and humiliation of defeat behind. Traveling with him is his friend, Josef Turner who is leaving on a whim. Before they get to their ship, the TS Bremen, in Bremerhaven, they forged a friendship with two other travelers from Neisse: Edo a Jew who left to prepare for his parents and sister to follow; Feliks, a teenage ethnic Polish farm boy because his family could not support him, and an American diplomat they saved from the tracks in Berlin’s Hauptbahnhof. The result is a friendship that sustained them through broken promises, misconceptions of the American dream, the Depression, Prohibition, assimilation into American culture, and World War Two.
Letters from family and others urged Matthias to return to Germany as the Nazi regime improved Germany’s economy and raised its national pride. But the war severed contact with his family for five years and sent him and his friends on separate paths. To a shipyard, building ships to carry the means of destruction to Germany and their Heimat. Into the US Army to fight in the Pacific, and later to join resistance fighters in Poland. Into Germany’s Wehrmacht to invade France and Russia and fight Americans in the Battle of the Bulge. And the Nuremberg trials to bring Nazi war criminals to justice.

Paul Marzell was born and raised in Philadelphia and currently resides in western Pennsylvania with his wife, Janet and Golden Retriever, Nala. He is a United States Air Force veteran and served in West Germany in the early sixties. He earned BSBA and MBA degrees in operations management and financial analysis from Temple University and Golden Gate University. Heimat is his first novel. He worked in the airline industry for thirty years with Trans World Airlines and USAirways in nonmanagement and management positions.