You are here: Home / Books To Read / Hail of Brimstone: A Kit Barker Novel by J.R. White 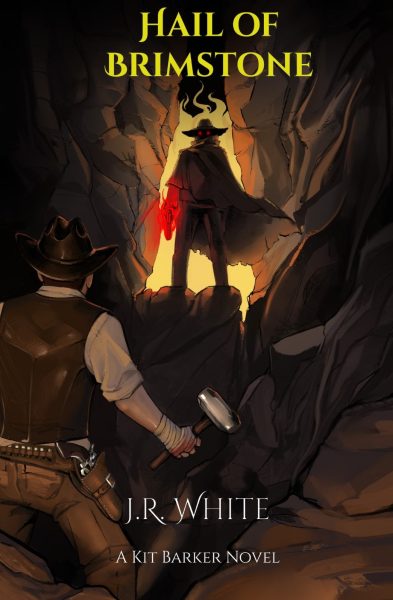 Hail of Brimstone: A Kit Barker Novel by J.R. White

“Forget your prize! Forget your friend! He is a husk, bled dry on the sands. He has been torn by what lingers, torn like they tear all who seek their secrets! Torn like they tore me!”
In the wilderness of the newborn nation of Mexico, a demonic gunman attacks a wedding, turning a day of joy into a massacre and wiping the mission of Nuestra Señora de la Sangre from the map.
A half-century later, vagabond gunfighter Kit Barker finds himself on the trail of a lost friend and a sinister relic that will bring him face to face with an evil that threatens to rend the very bonds of his sanity. Following a blood-stained trail from the streets of old New York, across the great plains, and all the way to the jagged coasts of Baja, Barker and his friends must fight for survival against both man and beast as they stalk a doomed path to its inevitable and explosive end… if necessary, to the very fires of hell. Can Barker defend his soul against the devils and demons of his own mind? Can mere men resist the thing that hunts them from beyond the Hail of Brimstone?
From the author of SHADOW OF WOLVES, a new action-packed tale of horror in the Wild West!
Price Reduced to $1.99 2/15/22-2/22/22 on Amazon, FREE on Kindle Unlimited.

Get This Horror Book From Amazon.

Storyteller J.R. White is an itinerant jack-of-all-trades. he has worked as a research scientist, crossed the Artic Circle as a merchant sailor, fought professionally in mixed martial arts and taught hand-to-hand combat as a military contractor. When not working on his next book, he can be found wandering in the woods with his daughters, both of whom share his enthusiasm for mischief. A father, adventurer, and military spouse, White and his family have lived in eight states from coast to coast in their nomadic journey across America.