You are here: Home / Books To Read / Grave Pursuits 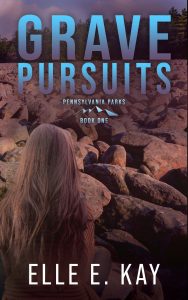 Emily Davis stumbles across a skull while searching for a missing hiker in Hickory Run State Park, and someone goes to great lengths to keep her away from the case.

Boulder Field’s national landmark status and its popularity makes it impossible to keep the story out of the national press, and a viral video puts Emily in the cross-hairs of a serial killer. The sergeant assigned to investigate the case is none other than her high school sweetheart, Wade Brunner.

The Butcher of Boulder Field must be stopped. Emily and Wade will need to work together to end his reign of terror.

Elle E. Kay lives on a hobby farm in Central Pennsylvania with her husband, three dogs, and many farm animals. She is a born-again Bible believing Christian.

She keeps perennial gardens and enjoys the wildflowers strewn about her property. The wildlife who visit the property are a joy for her, but nothing beats the excitement of a kid being born to one of her many goats.

The Billionaire’s Reluctant Bride was her first book in the multi-author Blushing Brides series, and it was followed by The Bodyguard’s Fake Bride published in February of 2020.

Elle’s website is updated with the latest information about her upcoming books.