You are here: Home / Books To Read / Furious Justice by Jacob Ralph 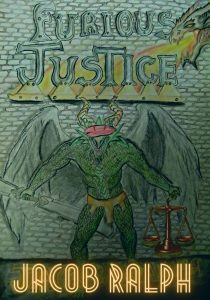 About Furious Justice by Jacob Ralph:

When love and sentiment impede justice, nature becomes the jury. An incorruptible jury that passes an unclear sentence: an Imprisonment without parole, a sentence to death by a spontaneous disintegration of the soul, or a disastrous injury or death caused by nature’s manipulation. Luckily, nature pardons her convicts when they repent. This is good because we are all convicts.

Fred, a journalist who was bored by his regular job routine was invited to record an origin reveal of an abnormal fossil called the Ferretorex. The supposed archeological lecture turned out to be a remarkable one.
The event wasn’t just an origin reveal. A popular archeologist and professor told a story of the living Ferratorex. The archeologist also revealed his long-time secret; he divulged his ability to incarnate again and again for thousands of years.
He told a story that seemed mythical; a historical mythical story of romance, betrayal, deceit, war, and crime. The story was like Greek mythology because he mentioned Neptune, Poseidon, Adonis, etc. These titans are popular in myths and legends. That was why Fred concluded that the famous archeologist was making the story up at first. But an unnatural phenomenon that led to the man’s disappearance made Fred believe the whole story.

Jacob isn’t an award-winning author yet.