You are here: Home / Advice & How To / Funny Business: Joke Writing Formulas for Writers (Comedic Epistemology Book One) 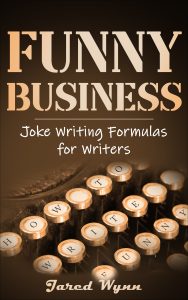 You know the old saying, “Dying is easy, comedy is hard?”

Now, you can have five of the fastest, easiest comedy-writing tricks and concepts from the Comedic Epistemology series for free. The chapters included in this volume are:

Plus, there’s a link to a sixth free chapter on the Listing Technique at the end of the book. Ever wonder how late-night TV writers and standup comics are able to come up with so many jokes about news stories that are only a few hours old? With this weird but simple trick, you’ll be able to write a dozen or more jokes about a single topic in the time it takes to watch a sitcom.

People who’ve spent hundreds of dollars on comedy-writing courses have learned more from this free book than from all the hours and dollars they spent on classes. Whether you’re a novelist, essayist, blogger, journalist, speechwriter, ghostwriter, or advertiser, if you’re looking for ways to integrate more humor into your writing, this book is the fastest, EASIEST way for you to get there.

Jared Wynn spent his formative years in Latin America, Eastern Europe, and the Middle East as an expat and diplomatic dependent. After what felt like several lifetimes overseas, he returned to America to pursue a higher education while bouncing around between odd jobs. To date, he’s been a cook, a bouncer, a geophysical technician, a hypnotherapist, a screenwriter, a Jujitsu instructor, and a standup comic, all of which he thinks make him a better writer but which probably just make him eccentric. He currently resides in Southern California with his wife and three stepkids.