You are here: Home / Books To Read / Free Worlds of Humanity 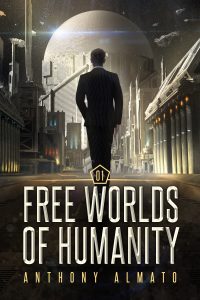 About Free Worlds of Humanity:

Humanity. A word that should be described as compassionate, sympathetic or generous. For occupied space, it’s a fickle word used by fickle men to describe a better state of being that is nothing more than an illusion. Humanity is human sanity. Like most things, it is a construct.
In the Great Darkness, humanity fled with the light. Some humans shed it for technological advancements, others for power through brute strength, and a few simply evolved beyond it. When the light returned, only a shred of humanity returned with it. As the new civilizations of the Free Worlds rose and were corrupted, their very humanity was quickly forgotten.

But in the colonized planets forming the Free Worlds of Humanity, not everyone is free. A select few live in luxury—politicians and socialites— influencing the masses through lies and deceit. Henry McWright of the Colonial Accord, the greatest politician in recent history and revered within the highest caste, uses mafia and guerrilla tactics to secure more power, cinching the noose tighter. Almost no one knows that he is a narcissist and a sexist, whose vices grow more unsettling with each page. It won’t be long before the noose settles around his own neck.

Another level of society is filled with the lies of those in power as well as secrets of its own. Women like Isabel Sideris hide in it. Those who initially ran from their pasts now have no choice but to plan the toppling of a planet that squeezes its people into submission. Bound by the legacy of her family name, through her father and her husband, as well as the children that she’s protecting, Isabel never had a chance at a different life. She had tried to protect her children and run from a life as resistance leader and is now thrust back into it. Isabel has no choice but to push forward into the future.

The third class of citizenry is for people like Mace Applegate, intelligent and high-ranking employees of expansive corporations. Even with their strict rules and regulations, his life is without hardship—until his wife’s unauthorized pregnancy. He’s forced to steal company secrets and flee to survive. On the run, he’s pursued by killers—but perhaps it’s not him they’re chasing.

On Civil Earth, the fourth and final caste is the lowest of all—those who are left to die. But Kathryn will never die—not if she can help it. A survivor from the wastelands, where the very air is poison, she’s one of the undesirables. Her enemies underestimate her. Their mistake. She is one of the few martial artists who can perform Agamo Verk, a lost art from before the Great Darkness, and her enemies often pay with their teeth. But as she climbs higher on the rungs of the system and has the opportunity to escape the city, she’ll take it with her teeth bared.

The only way to escape the Free World’s societal casting is by becoming a soldier of some kind, but even the military has its own status. Exhausted soldiers like Askar wish for death but are bound by duty, valor, and glory, and to ever reach purposefully for it. Cursed with a long memory and advanced fighting techniques, he may never die. And that scares him more than any enemy. But taking on a mission to find Mace Applegate for his Force Command will bring him closer to death than any crusade.

Freedom. Like all statuses and systems, it’s a fickle thing. And now that the first dominoes have fallen, it’s only a matter of time before another darkness consumes the whole of humanity.

This book follows five main points of view characters who are diverse and unique. Their stories intertwine through their struggles in the book, and each point of view has a distinctive final chapter that will leave the readers in awe because all five have twists within that will leave readers with a flurry of emotions.

Henry McWright is a lifelong politician loved by people of the Colonial Accord, but little do they know that he has two faces and conceals his evil, sexist narcissism behind a closed door. Henry has guided politics inside the Capitol Forum on the relations station for over twenty years.

Kathryn is unapologetically herself. She doesn’t care what people think of her because she spent years living on the surface of CIvil Earth in the yellow haze, killing to survive. When she finally comes back inside the megastructure of building 33, her life gets turned upside down.

Mace Applegate has dedicated his life to the Federate Corporation as a productive employee from birth who always follows his society’s three thousand page standard operating procedures. He had just enabled the planet’s new defense grid that he programmed. Everything changes when his wife tells him she’s pregnant, which isn’t allowed without the appropriate approvals through the Department of Family Management. Jamie Applegate decides to keep her baby, and now they must run.

Isabel Sideris has lived a life of hardship in the Human Alliance from the Unification Civil War. Her family had controlled City-State Athinia for thousands of years before the Lyons Twins of New-Sparta and their Lyons Pride shock troops started their surprise attack. Now Isabel is on the run with her kids, Adam and Juliet, trying desperately to get them to the relations station.

Master Gunnery Sergeant Askar is a steadfast Dolrinion Sentinel of Force Command BlackRock. He received the honorary rank of master after forty years of dedicated service. He’s tired and feels the weight of endless years in combat wearing him down. Battle Fatigue has consumed him with his tears from watching young pebble sentinels die at his feet and earn their place on the memory stone. Askar wants death more than anything, but death has other plans for him when his commander, the Gray Boulder, sends him on a mission to recover Mace Applegate, who had fled the Federate Corporation with Jamie.

Each of these characters learns through their chapters that it doesn’t matter which society they belong to, Civil Earth, Colonial Accord, Dolrinion Offensive, Human Alliance or Federate Corporation; Freedom is an illusion for the Free Worlds of Humanity.

Author Bio:
Anthony Almato doesn’t think of himself as an author, and Free Worlds of Humanity began as a video game concept before taking its current form. Having survived nearly insurmountable challenges during childhood and adolescence, in addition to his former careers as a professional gamer and a corrections officer, Almato uses his personal experiences to breathe life into his stories. When he isn’t writing, he can be found snowboarding, smoking cigars and enjoying the company of his wife and children. Anthony has lived with Type one diabetes for over 30 years.