You are here: Home / Books To Read / Forging of a Knight, Rise of the Slavekeepers 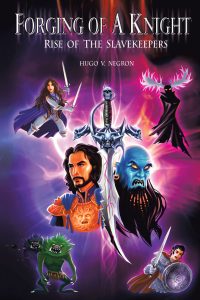 About Forging of a Knight, Rise of the Slavekeepers:

Qualtan has become a knight at last. With Glaive, the half-orcne thief by his side, he will join a host of new friends: Jesepha, the strong-willed female knight; her mentor, the elder knight Bartholomew, who carries a strange secret; the young and hot-headed knight Euric; the glum and impatient knight Richard; and the dashing merchant lord Visandus.

A seemingly routine mission will unravel into one of greater horror, involving inter-dimensional creatures, rival sea-faring pirate nations, and a face-to-face confrontation between Qualtan and Darksiege, one of Those That Stand in Shadow, at last! Should they somehow prevail, it will just be a precursor to an even GREATER threat!

Author Bio:
Hugo Valentin Negron is an avid fan of myths, legends, and folktales. He grew up in Illinois where he still resides with his wife and son. His background includes an M.A. in clinical psychology from Roosevelt University as well as an M.A. in industrial/organizational psychology from the Chicago School of Professional Psychology.

He enjoys reading, biking, and walking winding trails through darksome forests, searching out the mystical beings that reside therein.