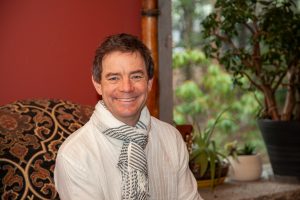 Tell us a little about yourself. Where were you raised? Where do you live now?
I live in Southwest Harbor, Maine, with my wife, our dog and our cats. I have always worked for myself, starting as a musician, horticulturalist, cook, and stone artist. I have written all along, but then in 2011, I was inspired to write novels. I guess I see the world through a particular lens, as we all do, and that colors everything, but particularly my writing. My world is bold and beautiful, with granite cliffs against crashing Atlantic waves. I value honor, dedication, patience, and grace under pressure. I value integrity and helpfulness and would like to think that good intentions and good acts are rewarded by a fair and universal God or gods.

I have just built a new treehouse office, which connects to my other little treehouse via a catwalk. This one is insulated for winter use and has a cute little heater. What I didn’t anticipate was, that if it is windy, the trees rock and creak so much that I can’t do voice recording. So, these days, I’m letting the weather dictate whether I narrate or write, and so far the mix has been pretty good.

At what age did you realize your fascination with books? When did you start writing?
I became enthralled with books very early on. I believe that I was reading at 4. My favorite book from that time was Richard Scarry’s “Big Book of Everything.” It showed pictures and names of everything in typical American life, from cars, buildings, or professions to kitchenware, farm animals, and clothing items. Only everyone was depicted as animals. Very humanoid animals, in that the frog guy was almost as tall as the bison guy, and the goose gal was not too much taller than the crow lady. It was kind of like a mix of Animal Farm and Where’s Waldo on ludes.

I built my own bed on stilts when I was twelve. That was after my first rudimentary treehouse, just a platform in the maple clump. Under that bed was a reading nook, with a little bookshelf, a white vinyl beanbag chair, and a lamp. I read all of the Fantasy greats, from Burroughs to Howard, and then on to sci-fi with Asimov, Herbert, and Heinlein. Later, I began to enjoy novels from Vonnegut, Robbins, Kingsolver, and King. I love history, and I suppose Pillars of the Earth inspired me to write my Flight of the Wren series.

Who are your favorite authors to read? What is your favorite genre to read. Who Inspires you in your writings?
I love comedy and have recently discovered Christopher Moore, and his hilarious “The Stupidest Angel,” best Christmas novel that includes zombie ever. I love the seriousness of Marion Zimmer Bradley, and the goofy imagination of Tom Robbins. I love the optimism of Barbara Kingsolver, and the wry fatalism of Vonnegut and John Irving. I love kvetching, so I’ve been a David Sedaris fan ever since Santaland Diaries.

Tell us a little about your latest book?
I just recorded the narration for my second audiobook, “Voyage of the White Bear.” It’s the second volume of the “Flight of the Wren” series, which is a huge epic that takes place at the end of the Viking Age. In Voyage, our heroine Hilja goes to the Greenland Colony in search of her mother and sister, taken as slaves from their village in Lapland. In Norway, Olav Haraldsson steals a ship and goes raiding in Ossinia, and the Witch of Vestfold goes on the run as a wanted woman, and finally becomes the demon that everyone believes her to be.
Anyway, it’s a big book, with a lot of plot threads…

I have found that while I narrate my books, I frequently want to make little changes to the wording, as I find items that were not evident unless the book was read out loud. Having said that, I’ve finished writing and editing book 3 of the series, “The Loom of Bones” and I am narrating chapters every day, wind permitting. As I narrate, I’m putting the final touches on the copy editing. In a few weeks, when I send the audio files to the studio for mastering, I will format the book for ebook and print, and get my book launch ready. Hopefully, this will happen in May.