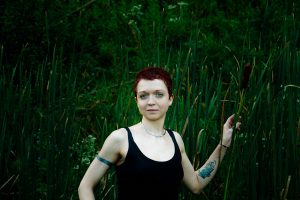 Tell us a little about yourself. Where were you raised? Where do you live now?
My name is Whitney Metz, and I am currently writing a magic realism series called Black Magick. I am a vegan, living outside the town of Mannington, West Virginia with Riley and Petunia, two pigs I adopted after my first internship with Farm Sanctuary. I have tried many different career paths in my life, but writing has always been a constant for me. It’s my outlet, my escape. I care deeply about animal rights and environmental protection, and like to reflect those things in my writing.

At what age did you realize your fascination with books? When did you start writing?
I’ve always loved books. My mother has told me that when I was a child, before I could read for myself, I would memorize the books that she read to me, so that it was like I was reading along with her. I’ve been writing almost as long as I’ve been reading. I wrote stories and poetry as a kid, and I’ve started multiple blogs over the years. I even published a book of poetry many years ago. It was only in the last few years though that I started thinking about writing as a career, and started writing novels.

Who are your favorite authors to read? What is your favorite genre to read. Who Inspires you in your writings?
The authors who have influenced me most are Neil Gaiman and Stephen King (especially his Dark Tower Series). I also get a lot of inspiration from comics and graphic novels. Gaiman’s Sandman really changed the way I think about writing, and Hellblazer is probably my favorite thing to read. I love reading anything that has to do with magic or the supernatural, even non-fiction. I’m always trying to learn as much as I can about different belief systems and mythologies, both for my own enjoyment and to make my writing as accurate as possible.

Tell us a little about your latest book?
My latest book is called Myths &Music. It is the second volume in my Black Magick Series, a story about the world behind the one we see everyday, the importance of the connection we all share with each other and with the Earth, and about finding our true paths. At the time that I started the series, I was actually trying to write short stories. I had this image in my head, of a guy chain-smoking outside an apartment building, in the middle of the night. The story grew from trying to figure out why he was there. It turns out that I’m not great at writing short stories; I always need to know what happens next.

In the first book, Sigils & Secrets, we meet Ben Harrison. He was well on his way to having the life he always wanted. He had a high-paying job, a great apartment and, most importantly, he had Carrie. She was fun, exciting, creative, beautiful, and a bit eccentric. Carrie had a fascination with the occult, which Ben found irrational, but not particularly troubling.

Then one night, during what Ben assumed was just another of Carrie’s standard ghost-hunting expeditions, something went terribly wrong. Now Ben must find a way to navigate a world that he never believed existed, in order to save the woman he loves. Soon, he begins to realize that he didn’t know Carrie nearly as well as he thought.

To make matters worse, Ben’s encounter with the supernatural has left him with a mysterious infection ravaging his body and mind, further blurring the line between what is real and what isn’t. He is forced to leave everything he knew behind and seek out a healer to cure him of his illness. In the process, he learns the truth about Carrie, about magick, and about himself.