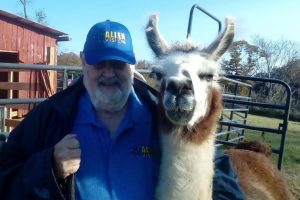 Tell us a little about yourself. Where were you raised? Where do you live now?
Hi, hello, how are ya, thanks for stopping by!

I’m Dr. Wesley Britton, a 65 year old retired college professor. I was raised in Mechanicsburg, PA where I returned in 1998 after living in and near Dallas, Texas for some twenty years or so. When I came back to Central Pennsylvania, I got married for the first time at the age of 45–to a lady who knew me all the way back in the fifth grade and high school. Ah, but I didn’t remember her from those long ago years. We were married for 19 years until she passed in April 2018.

I have a little 7 pound or so Yorkie named Clipper and a cat with the overlong name of Molly Marie Malone Britton. Right now, Clipper is pestering me for a walk out in our cold winter weather. Sigh.

At what age did you realize your fascination with books? When did you start writing?
I don’t recall when I started reading, I just always had my nose in a book. I remember one event in fifth grade when I told a teacher I had read all the fiction books in the library “except for those romance books for girls.” That teacher changed my life by introducing me to non-fiction. So it surprised no one when I got my Masters and Doctorate in American literature at the University of North Texas.
I began writing seriously, after many failed attempts with fiction, during grad school when I started pumping out scholarly articles, essays, and reviews in the mid-80s. I have no idea how many of those I churned out, especially as I still publish three or four book reviews a month for BookPleasures.com.
Then in the early years of the 21st Century, I started cranking out articles and then four books on espionage in the media. You can find out about those years of my career at www.spywise.net.
Then, come 2015, everything changed when I started publishing my Beta-Earth Chronicles sci-fi series which is still going.

Who are your favorite authors to read? What is your favorite genre to read. Who Inspires you in your writings?
Asking a Ph.D. in literature who his favorite authors are opens up a serious floodgate. Not only do I admire classic writers like Hawthorne, Twain, so many, add in spy writers like Fleming and Clancy and sci-fi folks like Herbert, Farmer, Heinlein, on and on. Genres I like? Biographies, sci-fi, thrillers, popular culture, rock music . . . always have a ton of titles in my pile.
Who influences me? Who or or what doesn’t? My eyes and ears are always open to images, characters, settings, dialogue from what I read, see on television or the movies, or experience in just day-to-day things in life. Several friends are major influences on directions I take. Or not.

Tell us a little about your latest book?
Alpha Tales 2044 is book seven in the Beta-Earth Chronicles, but it really is a stand-alone volume very different from the six novels that preceded it. For one thing, it’s a collection of short stories using characters introduced in book six, Return to Alpha. It’s a mix of genres, sci-fi, mystery, horror.

The stories are set on our planet decades in the future after climate change and waves of weaponized plagues have reduced earth’s population. A group of aliens from two other earths arrive to tell us about the multi-verse, but a religiously orthodox planet doesn’t want to hear about very different cultures, other kinds of humanity, and especially other deities. So most of the stories have the aliens, and two of their Alpha-Earth spouses, on the run as fugitives on a fearful and angry planet.

I thought Alpha Tales 2044 turned out so well that I’m working on new short stories for a possible future collection. Stay tuned–

And, again, thanks for stopping by!