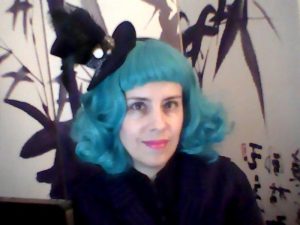 Tell us a little about yourself. Where were you raised? Where do you live now?
I was an only child, and we moved around a lot, though not within that large of a geographical area. My parents strongly emphasized education, and therefore we usually lived around Asian immigrants wherever we lived, though I first got involved with immigrant community arts events and started learning my first foreign language when I was in middle school. This really impacted my community involvement as an adult as well as my creative writing later. I was a volunteer ESL teacher for a lot of years helping with the Asian community, I worked as a core volunteer on programming and educational outreach for a dozen or so years with the now-defunct Silk Screen Asian Arts Organization, and I’ve provided cultural programming for local libraries and Japanese festivals for 5 to 10 years. I’ve also studied a lot of traditional and fusion dance styles from the Middle East and Asia for decades. I now live in Pittsburgh, PA, in a very old house. I’ve had both small lap dog breeds growing up and cats more recently, though I don’t have a pet right now.

At what age did you realize your fascination with books? When did you start writing?
When I was seven, my father noticed I was writing imitations of the back cover copy of novels we had around the house, and he gave me a notebook with instructions I should write the stories to go with the descriptions. I also was fascinated by our family set of encyclopedias then and loved the Time Life book series with a volume for each foreign country we had, particularly India. I think I memorized that one when I was little, just like I did with Bulfinch’s Mythology a number of years later, so I like nonfiction, world literature, and foreign languages as well as regular genre fiction.

Who are your favorite authors to read? What is your favorite genre to read. Who Inspires you in your writings?
I read a lot of horror and fantasy growing up with some of my father’s favorite sci fi and my mother’s gothic romances thrown in here and there. Tennyson, Walter Scott, and Chretien de Troyer were some of my classical influences. I also loved Edgar Allan Poe, H. P. Lovecraft, Abraham Merritt, Agatha Christie, and the more modern Hickman and Weiss Dragonlance series. Michael Moorcock’s Eternal Champion series was fascinating, too, and I loved the romantic overtones of Meredith Ann Pierce’s The Darkangel though I never finished the trilogy. Lillian Jackson Braun’s The Cat Who Series was really fun as was Mary Stewart’s Merlin Series. I got into Frank Herbert’s Dune series at one point, though for the most part I’m not a big fan of science fiction. I really prefer pre-modern genre stories.

However, my college major, of course, was Russian, which required reading in a lot of Soviet-Era banned fiction and works from the 19th century, so we read a lot of like Gogol, Dostoevsky, and Turgenev in English translation and Gorky or Pushkin in the original Russian. We once had to memorize a poem in Russian and recite it for the class, Soviet-style. My classmates and I were really mesmerized by some of the rehabilitated authors since they had ideas that were unique and outrageous though they often upset the authorities.

Since I graduated and switched immigrant communities that I served, I studied East Asian languages and began reading their classics, some in translation and some in the original languages. I like that challenge and breadth of exposure because it gives a writer more ideas and techniques to incorporate into their own writing. Some of my Japanese language influences include Ryukishi07, whose light novel versions of his work have some really surprising experimental elements, and Fuyumi Ono who writes a lot of interfaith horror for girls. Just about anything by her is on my bookshelf. Nahoko Uehashi’s anthropological approach to her high fantasy novels is also quite fascinating.

Tell us a little about your latest book?
My most recent novel is The Lucky Cat and the Kaiju Horde, volume 4 of my political horror-fantasy satire The Lucky Cat Series. The series follows three generations of women in the Hagiwara family as they deal with the terrifying realities of living in a futuristic, predatory state after World War III has transformed the globe. As the unofficial history of the superstate comes to light and reveals that the grudge of a persecuted dollmaker has unleashed a vengeful set of Girls’ Day dolls against it, the world will never be the same.

With this series, I really wanted to revisit my Russian literary roots, so my everywoman Kumori Ando, the main character in volume 1 where the political intrigue begins, is largely based on the milquetoast civil servants of 19th century Russian literature. Later in volume 3, Trofim Shulga also fits this meek, ordinary character type.

The inspiration for some of the kaiju elements of this series comes from my research on Godzilla films, but the early 1920s Symbolist fiction of Russia also played a huge part, like Mikhail Bulgakov’s Heart of a Dog, which is political satire with fantasy elements. I used the magical Lucky Cat statue in the first volume as my only fantasy element, though I did have an idea of where I wanted to drive volume 2 with more of the dolls, but I let that idea sit until I felt I could play it straight and not make the premise as silly as it sounds. Hopefully, the result is more horrifying and threatening than ridiculous. The second volume delves more into my overall theme of state violence against citizens, which was inspired by 20th century world history since there were a number of countries that did this kind of thing, and it expands its range of fantasy characters to include a more sinister portrayal of Japanese fox spirits into volume 4.