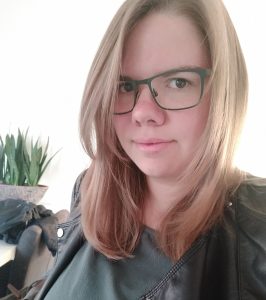 Tell us a little about yourself. Where were you raised? Where do you live now?
I was born as a second daughter to a loving and caring mother, when she was 19 years old. Although she was struggling at the time I consider my childhood a very happy one. We were living in a three room apartment in the capital city of Estonia for the longest time. During that period we tried our hands in caring for pets, we had a turtle and a cat at one point, but neither of them stayed with us for very long (due to no fault of ours, I still dare to think!) There was a time we moved around a lot, until we settled into a semi-detached house with a big garden. I always wanted a dog and it was a perfect place for one, instead I managed to bring home a rabbit, who enjoyed hopping on the grass as much as a dog would have!

When I moved out of my parents house, I also moved out of the country to the Netherlands. Now I own my own semi-detached house, with a much smaller garden, and still have no dog!

At what age did you realize your fascination with books? When did you start writing?
I started reading around twelve years old. It was the time when other girls arraged slumber parties, experimented with make-up and discovered new fashion styles; I discovered new worlds! I realized I had a talent for writing a few years after that, when my literature teacher started reading my essays out loud infront of the whole class. I did try my hand at a few short stories, while being at high school, and found encouragement from the feedback of several avid readers. That’s when I knew I wanted to write a book. I just never managed to find the patience to finish one until now.

Who are your favorite authors to read? What is your favorite genre to read. Who Inspires you in your writings?
I currently consider Grimoire saga by S.M. Boyce one of the best reads. The Black Dagger Brotherhood by J. R. Ward is also high in my list and then several authors like John Green, Kelley Armstrong, Abigail Roux and Patricia Briggs can also be mentioned, but if I were to count out everyone, whose work I’ve enjoyed we would be here awhile.

I mostly read anything fantasy, romance, YA and mystery, but I am discovering new things I enjoy every day and can’t really be confined into one ‘box’.

I think every single story I have read thus far has a part to play in inspiring me in creation of my own fantasy world.

Tell us a little about your latest book?
Through Hell & Highwater is a YA Fantasy story. A story of how saving the Earth brings together a Shifter, two Vampires, Werewolves, an Elf, Half-Fae, a Wizard and an Orc. When the world is slowly turning into chaos the students are trying to find a way back. Back to what is safe and secure. But in order to do that, the students have to go through hell first

When I first started telling my friends about it they immediately compared it to Harry Potter (as there is a magic school involved) and Lord of the Rings (mostly because of the orc). Yes, I might have been influenced from both of those books while writing the story, but I’d like to think it turned out to be an individual story.