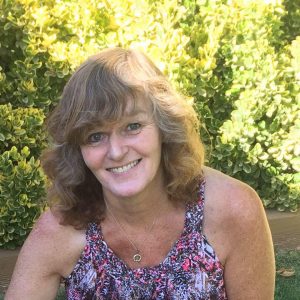 Tell us a little about yourself. Where were you raised? Where do you live now?
I am originally from England and moved to the United States in 1979. When I met my husband in the 90’s I became a commercial fisherwoman and fished off the southern coast of California for ten years. They were the most brilliant times of my life, thus far. I am the youngest daughter of science fiction author, James P. Hogan and I owe my passion for reading and writing to him. My other passions include hiking, fishing, camping, kayaking, and riding ATV’s
Both my husband and I are avid animal loves. We have two dogs, a Britney and a Jack Russell. We also have five chickens and over 150 pigeons. My husband is also a professional falconer and we have six falcons.
RECKLESS BEGINNINGS is my first novel and I’m currently working on a sequel titled BETTER ENDINGS and also a prequel, THE JOURNALS OF TAMMY MELLOWS

At what age did you realize your fascination with books? When did you start writing?
I developed a passion for writing at a very young age. fourteen to be exact. My father was the late science fiction Author, James P. Hogan. By far he has and always will be my inspiration. He showed me the joy of books for which I’m forever grateful and I watched him fulfill his lifelong dream of becoming a successful author through hard work and determination and never giving up.

Who are your favorite authors to read? What is your favorite genre to read. Who Inspires you in your writings?
I have so many favorite authors that it’s hard to pick just a few. I love the classical tales of Emily Bronte, Charles Dickens, and Mark Twain. I also love J.R Tolkien and the world he created in the Hobbit Series. I love a good murder mystery thriller and also light-hearted romantic comedies.

Tell us a little about your latest book?
Reckless Beginnings is women’s fiction based on True events that have happened in my life. Tammy Mellows, (the main character) is me. I wanted it to read like a story and not a memoir, (personal choice,) therefore, names, places and some facts about certain events have been altered.
I developed a passion for writing at the early age of fourteen. I think having an author for a father had something to do with it. It was around this time, one of my older sisters ran away and couldn’t be found. Unable to search for her, I became frustrated and began writing in a journal to gather my thoughts. My book begins with the disappearance of my sibling.
A few years later and with my sister still missing, chaos began to erupt in my own life.  I was on a path of making hideous choices and in denial because I wanted the white picket fence and the perfect American family life and ignored any signs that may disrupt that dream.
I allowed my life to be dictated by a heroin addict, the father of my child.  Believing that his needs were more important than mine, I got swallowed up in his lifestyle, losing my sense of direction, courage, and identity. Throughout the chaos, I continued to write in my journals.
During that time, I searched for books written by other women that found themselves in the same predicament as myself but came up short.  I only discovered “How to” books, but they were not the voices I wanted to hear. I needed to know how they coped.  What did they do? I wondered what their everyday lives were like; I yearned for some sort of connection with someone.  I had so many unanswered questions.
That was when the seed was planted for my debut novel, Reckless Beginnings. But it didn’t happen right away. I tucked it away and continued to struggle with the battles in my life.
Twenty years later I still had not written the book, but the thought never left me. When my father suddenly passed away in 2010 and a year later I was diagnosed with breast cancer I began to think seriously about the book and began writing the outline. Eight years later it’s finally published. (Phew.)