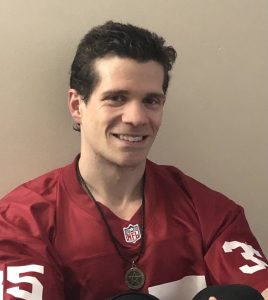 Tell us a little about yourself. Where were you raised? Where do you live now?
I write in several forms of fantasy, each of which contain elemental magic. My favorite genres to write include paranormal and military fantasy, and each book I write, regardless of subgenre, belongs to the shared Elementals Universe. Currently, I live in Northern West Virginia smackdab between Ohio and Pennsylvania and have spent my entire life in the area. No pets at the moment, though I come across plenty of neighborhood cats when I go running at night.

At what age did you realize your fascination with books? When did you start writing?
Oh, since my first memories! I remember becoming a reader early on, even before I started school; though I’m sure my “reading” back then consisted more of me memorizing books my parents read than actual reading! I started writing in grade school, but I took a break from it from my high school days to my early twenties before the rekindling began in 2014.

Who are your favorite authors to read? What is your favorite genre to read. Who Inspires you in your writings?
Paranormal fantasy is by far my favorite genre and my favorite authors reflect that. E.E. Holmes’ World of the Gateway helped inspire a few of my titles – especially my paranormal fantasy, Tarja Titan. I’m also a huge fan of Carissa Andrews and her Windhaven Witches Series, and Tarah Benner (Witches of Mountain Shadow). Theme-wise, Kate L. Mary and Tracy Lawson, both of whom write dystopian titles, are also favorites.

J.K. Rowling really kicked things off when I came across her Harry Potter Series in grade school. And yes, I took some of her concepts and placed them into both Book I of my Elementals of Nordica Series, and Tarja Titan – the first full-length novel in the Terrian Chronicles whose timeline parallels that of my perma-free novella, Liza Fury: The Discovery.

Tell us a little about your latest book?
I’m currently in the middle of publishing six titles (seven when you count my perma-free novella, Liza Fury – The Discovery), all of which I’m releasing in the first half of 2022 that I’ve dubbed The Renegades Epic – Phase I.

The latest book I launched is called Wind Wielder, Book I in this six-book shared universe frenzy. It’s a military fantasy rich in elemental magic, sword and sorcery, dystopia, and a dash of science fiction that tells of a global empire framing my protagonist for a crime he did not commit. It’s safe to say that empire knows far more about my protagonist than he knows about himself.

As you can see, you’re going to come across multiple genres in my work, though it also remains true to the fantasy genre than any other. Books II and III, entitled Wind Master and Wind Keeper, are my upcoming sequels to Wind Wielder, and they further expand the series more into both science fiction and into the metaphysical realm.

And since I’m rapidly-publishing the first three books in Elementals of Nordica, with three more titles to follow that also take place in the same universe (yes, characters from each series will cross over into the others), if you love to binge read and see familiar faces pop up in other tales, chances are you will love Wind Wielder, its sequels, and the entire Renegades Epic within the Elementals Universe.

How long did this take me to concoct? Let’s just say the second I discovered the Marvel Cinematic Universe existed, seeds planted themselves in my mind to create my own shared universe. Except mine dives deeper into fantasy.