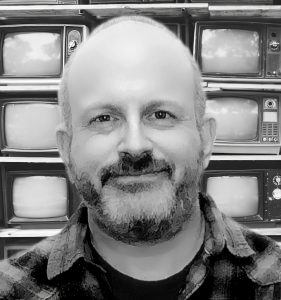 Tell us a little about yourself. Where were you raised? Where do you live now?
I grew up in southern New Jersey, in the Philly suburbs. As a kid, I couldn’t imagine why anyone would live in a big city, but I moved to New York City eight years ago and it’s perfect for me. Among other things, it’s cool living in a place where new brick-and-mortar bookshops have opened in recent years. I love browsing in a well-curated indie bookstore. As for pets: I don’t have any now but I love cuddling or playing with friends’ cats, dogs or rabbits.

At what age did you realize your fascination with books? When did you start writing?
I fell in love with books before I even knew the alphabet. My parents would read storybooks to me, and by age four I would recite them back from memory, turning the pages, pointing to illustrations, and pretending to read them aloud.

I write and lecture about how the broadcast media have portrayed LGBTQ lives over the past century. I was always fascinated with the mass media and their power to reflect and influence social attitudes. Going through old file boxes from my parents’ house, I recently found some surprisingly good papers I wrote in high school and college about 1940s wartime propaganda on radio versus images of the Vietnam War on 1960s television, and about the role of newspapers in the Revolutionary War.

Who are your favorite authors to read? What is your favorite genre to read. Who Inspires you in your writings?
Good LGBTQ histories fascinate me because I came of age at a time when our history was buried and hidden. We’d been erased from the record, which made it easier for people to see us as dangerous “others.” The next LGBTQ history I’m going to read is Hugh Ryan’s When Brooklyn Was Queer, which I’ve heard great things about.

My most direct inspiration is Vito Russo’s landmark history of gay images in cinema, The Celluloid Closet. I read that when it came out in the 1980s and I attended one of Vito’s lectures, and I thought “Hey, I could do something like this about queer images on television.” Not only was my book, “Alternate Channels,” inspired by Vito’s work, but the lectures I give at colleges and community events are very similar to Vito’s old video-illustrated lectures about the movies.

For pleasure, I read all sorts of books. Last month I revisited Douglas Adams’s “Hitchhiker’s Guide to the Galaxy” series (the first two of which are brilliantly entertaining). I also recently read Kate Chopin’s 1899 novel, “The Awakening,” which is a stunning, vivid, devastating piece of writing. Now I’m in the middle of “We Are Never Meeting in Real Life,” a collection of cranky, funny personal essays by blogger Samantha Irby.

Tell us a little about your latest book?
It’s a 20th-anniversary revised edition of “Alternate Channels: Queer Images on 20th-Century TV.”

In 2018, when I started work as the lead historical consultant for the Apple TV+ docuseries Visible: Out on Television, I figured it was time for a corrected version of my book. I went through the 500-page original, fact-checked everything from scratch, rewrote a few sections, reinstated things the original publisher had cut, and added about 100 photos.

The first edition grew out of an experience I had as a grad student in the late 1980s, volunteering at Gay and Lesbian Peer Counseling of Philadelphia. A lot of the callers were gay teenagers who said they were considering suicide, and when we would ask them what they thought gay people’s lives were like, they always said the same thing: “I only know what I see on television.”

That got me thinking about the power of the media, and I started researching the history of those TV images, both in terms of what sexual-minority characters had appeared onscreen and what was happening behind the scenes in the television industry and in activist movements that helped to shape those images. Eleven years later, in 2000, it was a well-received book. And now there’s an even better edition of it.