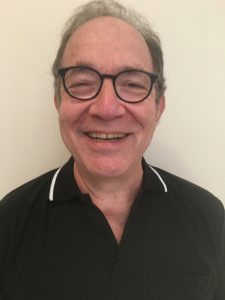 Tell us a little about yourself. Where were you raised? Where do you live now?
I was born and raised in New York City, and lived in the San Francisco Bay Area, where I practiced criminal law. I retired in 2015 and since then have split my time between Tampa, Florida, and Thailand. When I’m not writing, I practice blues guitar and play with my cat, Curious.

At what age did you realize your fascination with books? When did you start writing?
I always wanted to be a writer, but let myself be talked into becoming a lawyer. I did earn an MA in Creative Writing before law school, and I’ve returned to my real love. I wrote many short stories in college and grad school, and started again when I retired. Bangkok Shadows is my first novel. A sequel will be released this summer.

Who are your favorite authors to read? What is your favorite genre to read. Who Inspires you in your writings?
I have so many, it’s hard to make a list, but I’ll try. Ernest Hemingway. Joan Didion, Ward Just Paul Auster. Julian Barnes. Dashiell Hammett, Margaret Atwood, Loren Estleman, Flannery O’Conner…I love too many to list. As for genres, I usually read literary, classics, sci-fi, mystery, thriller, historical. I am inspired to write by people and events I have experienced or at least been told about. After that, everything else is made up and bears little if any resemblance to any real events or people.

Tell us a little about your latest book?
Glenn Murray Cohen was a stressed-out criminal lawyer recovering from a failed marriage. When he stumbles upon illicitly earned money, he uses it to start a new life in Thailand. For seven years, Glenn enjoys the easy life of a rich expat in Bangkok. Then the CIA uses Glenn’s love for the alluring and enigmatic Noi, to lure him into a dangerous plan for which he is woefully unprepared. Join Glenn and his friends from the mysterious NJA Club, as they take a wild ride through Bangkok’s seamy underside. Meet an aging hippy with deadly skills, a retired Thai general engaged in some murky businesses, and a whole cast of interesting Thais and foreigners, set against the exotic noir background of Thaialnd.