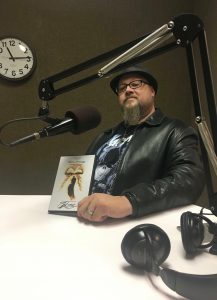 Tell us a little about yourself. Where were you raised? Where do you live now?
I grew up in Northeast Tennessee and have lived in the area my entire life. The first fourteen years of my life, I lived with a lake in my backyard. It was such a great time and, looking back, I really miss living there. For the most part, it was peaceful. I could swim or canoe, or just play around the water. My brother and I loved living there. When I was 14, my family moved about 20 minutes into the city and I’ve lived there, or around there, ever since.

Do I have any pets? Yes. I have a dog and two cats.

At what age did you realize your fascination with books? When did you start writing?
I’ve always been what you would consider a “good” reader. It was around first grade I was put in an advanced reading program, but I was a lazy student. I always wanted to do my own thing, so my school work wasn’t a priority. It’s unfortunate because now, as an adult, I like to learn.

I always liked comic books over novels. I guess because there was artwork and novels felt to hard to complete. Once I became an adult, my love for reading really improved. I regret not loving books (novels) when I was younger as much as I do now.

I’ve always been compelled to create. I guess when I was about five or six, I started drawing my own little comic books, so that was a start for me. Then, at about twelve, I started writing my own stories. They were terrible, so I didn’t do it often. Then, at about eighteen, I fell in love with screenwriting and wanted to do that for a living. I wrote numerous movie scripts, but ultimately decided I should be a filmmaker because I didn’t want anyone messing with my visions.

That didn’t last long. I wasn’t a good filmmaker. I was a better writer. However, I still have a passion and love for filmmaking, I just know and understand that I’m a better writer and I’m more comfortable doing that.

Who are your favorite authors to read? What is your favorite genre to read. Who Inspires you in your writings?
I love Stephen King, George R.R. Martin, C.S. Lewis, J.K. Rowling, J.R.R. Tolkien, H.P. Lovecraft, Mark Twain, Timothy Zahn, and a bunch of independent authors- too many to name. Some are actually friends I’ve made along the way, so it’s cool to read someone’s work and have them influence you and then you become friends later and bond over writing.

I get inspired to write numerous ways. My family is my biggest inspiration, but ultimately, I just have story ideas in my head that I feel I need to get out. Not all of them are great, so my favorite ideas are the ones to get published.

I like horror, fantasy, and science fiction. Those are my favorite genres and what I love to write. I also write superhero fiction, which is a direct connection to my love of comic books.

Tell us a little about your latest book?
The last book I had published was the fifth book in my GLOOM series of novels. It was called GLOOM: Ronin. GLOOM is my action\adventure comic book series that centers around a vigilante in Detroit. It’s my most popular books and I’m going to start writing the sixth book in 2020.

Right now I’m editing a comic book called NEBRASKA that I worked on with an artist friend of mine, Christopher Gibbs. Chris passed away a few years ago, so I assumed the comic book we were working on was never going to happen. However, I was gifted the original artwork he was working on when he passed, so I’ve went back and retooled the script and should be assembling the book soon. After that, it’s off to the printers. It’s a project that’s bittersweet to me. I’m glad to finally be getting it out there to the public, but I hate it’ll just be the one issue and I won’t get to work with Chris again.

I’m also currently writing a fantasy novel called Realms of Chaos. The first book is called The Broken King, but after seeing how Game of Thrones ended, the title will more than likely change before publication. It’s one of those coincidences that happen, but it’s okay. At least I don’t have to rewrite my entire book.