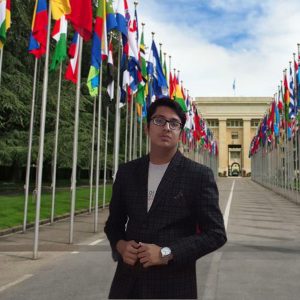 Tell us a little about yourself. Where were you raised? Where do you live now?
It’s always a pleasure to introduce oneself, to the interview team of such a renowned magazine! I’m Souhardya De, born in 2004, in the suburban district of Midnapore, in West Bengal, India. I’m 16 years old and live with my parents, my father being a professor at the nearby college and my mother being a teacher.
And well? For pets? I’m really not good at keeping pets! Probably gonna get a dog in the coming years!

At what age did you realize your fascination with books? When did you start writing?
I was a writing enthusiast since the beginning of times. It was my father who first introduced me to the world of English, when I was a mere boy of 6 months. And consequently, my English developed better than my native language, Bengali.
I authored a book, The Scion of Suryavansh, having published it with Amazon, United States, when I was about 13 years old. This was my first poetry epic, being purely focussed on events of the Valmiki Ramayana. It was in 2019, when I published my second book, The Chronicles of Suryavansh, a drama on Lord Rama, in English and French, again from Amazon USA.

Who are your favorite authors to read? What is your favorite genre to read. Who Inspires you in your writings?
I’m a true fan of Dr. Shashi Tharoor and am always reading him! Besides, I’m into Chetan Bhagat, Durjoy Datta and other such romantic authors, cause I don’t take myself too good at it!!!
I’m mostly into Classics, Historical fiction and. Mythology.
My father always encourages me in my writings and my mother in my illustrations!

Tell us a little about your latest book?
The Chronicles Of Suryavansh, ISBN: 9781797920498
As per the India Book of Records, the book is the first book to be written on Ramayana, in English and French, in the form of drama. The book was also highlighted when I won the Nabyashrote Sahitya Samman Purashkar 2019. For this publication and my contribution to classics, I was awarded the Fellowship of The Royal Asiatic Society of Great Britain and Ireland, the Highest honour in South Asian History and Culture, at 16.
It took me an approximate one and a half year to complete the entire thing!
After the publication of the book, I was nominated for the Crossbook Awards 2019. I was elected as a Coordinator at the Statesman News Agency, for their weekly magazine, VOICES, where I’m a frequent contributor, writing on relevant historical, and socio economic issues. I’m also a columnist at The Citizen, where I write on Gender Equality.