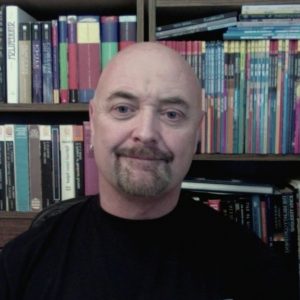 Tell us a little about yourself. Where were you raised? Where do you live now?
I’m originally form the UK but am now based in Calgary in Western Canad. I’m the author of science fiction and fantasy novels for children and young adults, including The Alchemist’s Portrait, The Sorcerer’s Letterbox, The Clone Conspiracy, The Emerald Curse, The Heretic’s Tomb, The Doomsday Mask, The Time Camera, The Sphere of Septimus, Flashback, Future Imperfect, Twisted Fate, and the Shadowzone series. I’m also the author of seven guides for writers, including The Time Traveler’s Guide, The Children’s Writer’s Guide, The Working Writer’s Guide, The Social Media Writer’s Guide, and many non-fiction books.

I’m an instructor for adults with the University of Calgary and Mount Royal University and also offer a number of services for writers, including coaching, editing, consulting, and writing workshops, as well as copywriting services for the business community.

At what age did you realize your fascination with books? When did you start writing?
In terms of writing books and stories, when my children were small, I starting reading children’s books again for the first time in many years. Some of the books were wonderful and I wished that I could write something similar. However, some of the books were very poor and I was surprised that they’d ever been published. This made me wonder if I could write stories of my own. I started thinking that I should write fairy tales and picture books for younger children but after reading the first three Harry Potter novels, I realized that I wanted to write for the age group that those books are aimed at. I wasn’t interested in writing about the same things, such as magic, wizards, and imaginary creatures, and instead focused on themes that I was interested in, such as science fiction, fantasy, time travel, history, comic books, ancient mysteries and civilizations, superheroes, other dimensions, and the paranormal.

Who are your favorite authors to read? What is your favorite genre to read. Who Inspires you in your writings?
I don’t really have favorite authors, more genres or books and stories really. I read lots of different things but I’d say much or it is in the science fiction or fantasy genres, although I also occasionally read nonfiction too.

When I began my career as a writer I was influenced by the earlier books in the Harry Potter series. However, I didn’t want to write about wizards, dragons, or magic, but rather about the things that I was interested in, such as time travel, the paranormal, superheroes, ancient mysteries, or history. I was also influenced by Phillip Pullman’s The Golden Compass, The Subtle Knife, and The Amber Spyglass, along with some other excellent fantasy and science fiction works

Tell us a little about your latest book?
The Shadowzone series involves the discovery of a grim dystopian version of Earth that’s ruled by a totalitarian dictatorship, the threat of a deadly virus, and a race against time to save the lives of millions. This is the synopsis for the first book, entitled Shadowzone.

“While watching intense flashes of lightning during a violent storm, Ben experiences mysterious and disturbing visions of another world, one very different from his own. In the chain of events that follow, Ben encounters Charlie, a girl from a dark version of Earth, a planet doomed by the effects of environmental catastrophe, where the leaders will stop at nothing to complete their deadly mission.”

The second part is entitled Into The Web and is followed by Black Dawn.

The original idea was about someone capturing mysterious images on a video camera of a person that no one else could see. It was around the time that a local hospital was about to be demolished. I imagined that my character was filming the event and captured the image of the person stepping seemingly unharmed from the rubble as the building came down. The idea of capturing unexplained images on film was something that I’ve continued working on too.

For a while, I was never sure the idea would come to anything. It was early in my writing career and I put it aside and worked on other stories, but I’d periodically add another element to the story about the camera and the mysterious individual. At one point, I decided that the person that the boy caught on film wasn’t a ghost but from another dimension or perhaps a parallel universe and they were attempting to contact him for some reason. I then began to add details of this other Earth and the reasons for the connection to our world, and it went from there. An initial concept involving kidnappings from hospitals didn’t quite work, so instead I developed the idea of a deadly virus, which was a good fit with the type of government running the other Earth. Once that was all in place, I was able to get to work.