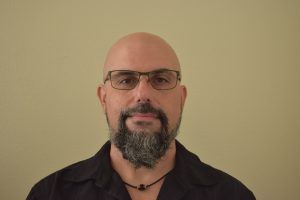 Tell us a little about yourself. Where were you raised? Where do you live now?
I was born in Los Angeles, but my family moved back to Pennsylvania when I was still an infant. I grew up on the east coast. Then I traveled the world for the Army and traveled America for software companies. Now, years later, I am back in Los Angeles, where I was born but had never lived until now. I share my life with my cats Hank, Logan, and Princess.

At what age did you realize your fascination with books? When did you start writing?
Writing began for me in the third grade. I wrote poetry about chess and Norse mythology. With no writers in my life, I have no idea what inspired this. My first submission was an article for “Dragon” magazine. They rejected it of course. But I was on my way! …sort of. In high school, my senior year creative writing project was an Ann Rice clone. While reading weekly chapters to the class, no one seemed to be listening. But late in the school year, the novel reached a scene where two vampires were sentenced to death by sunlight. As a door opened to reveal their sun-bleached bones, someone yelled, “Hey! Why did you kill them? They never did anything wrong.” I was surprised and flattered. And hooked. I wanted to be a writer. It wasn’t until 2006 that I was finally published by Nth Degree Magazine. It was story about a psychic computer hacker. What’s that mean? Read it from my published stories page.

Who are your favorite authors to read? What is your favorite genre to read. Who Inspires you in your writings?
I am a Kurt Vonnegut fan. My favorite is Hocus Pocus but Cat’s Cradle and Galapagos have always stuck with me. I am also an Ann Rice fan and Stephen King is an amazing author, especially when he writes something like The Long Walk.

Tell us a little about your latest book?
Growing up in a space station, DJ dreams of writing music but he can’t make a living on it, not in the Stone River Asteroid Belt. Thanks to company’s never-ending contracts and impossible to afford transit, leaving isn’t an option. DJ expects to end up working for Black Mountain, just like his dad and everyone else. When his father goes missing, DJ finds an encrypted file and other evidence that his dad was a hacker in the company’s secret war of industrial sabotage, sometimes claiming lives to knock competitors off the most valuable asteroids. To recover the evidence, the company sends a lifelong family friend, Agent Coreman. DJ is forced to make a run for it, hoping to find justice and maybe his dad.