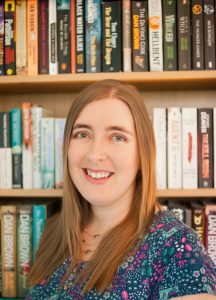 Tell us a little about yourself. Where were you raised? Where do you live now?
I’m a Chartered Marketing Manager and have written professionally for my business career for over a decade before turning my hand to fiction. Raised in York, England, I now live in Leeds with my husband Chris and my son Jack.
As an avid crime fan, I regularly participate in the renowned Theakston Old Peculier Crime Writing Festival in Harrogate and I relish attending literature festivals across the country as well as engaging with online writing communities.
Keen to support upcoming authors, I recently launched the #IndieWritingWisdom initiative on Instagram to collate and share inspiring, original quotes from a wide range of different writers to encourage others.

When I’m not writing, I enjoy reading, countryside walks, movies, musicals and almost all chocolate (but controversially not Oreos).

At what age did you realize your fascination with books? When did you start writing?
I’ve always written stories, ever since I was about 5 years old. I find it to be a really positive creative outlet, it makes me feel so alive! Murder at Macbeth is my first full-length novel, before that I mainly focused on short stories and poems.

I’ve always wanted to write a book and it was my husband, Chris, who finally convinced me that I could do it.

Who are your favorite authors to read? What is your favorite genre to read. Who Inspires you in your writings?
I’ve always been drawn to the crime genre, from books and TV shows to murder mystery games! There is such a sense of satisfaction in trying to identify the culprit in an intriguing whodunnit, especially when there are lots of twists and turns as new clues turn up. I’ve always found the best mysteries hook you so well that you end up thinking about solving the crime even when you’re not reading it.

One of the most influential authors for me is Paula Hawkins (who wrote The Girl on a Train and Into The Water). I really loved how her stories unfold through different narrators’ perspectives and the mystery is gradually revealed. That writing approach is definitely something that influenced my own novel.

Tell us a little about your latest book?
Murder at Macbeth is a crime mystery novel centred around a talented, young actress who unwittingly stabs herself live onstage after a prop knife is tampered with. It’s a classic whodunnit as suspicion immediately falls on her eclectic band of castmates and the detectives have to figure out who had the motive to kill the show’s leading lady. Bitter rivalries, secret trysts and troubled pasts are just the beginning of the story…

Murder at Macbeth was longlisted for an international debut novel award and has received a lot of advanced praise from a number of other authors, including the No.1 bestselling crime author Joy Ellis, who said she “loved the book” and “for a debut novel, it is a cracker”) and Carol Deeley, author of the Britannica series, who said it is “a classic whodunnit that entertains in true Poirot style and read like a really good episode of a prime-time crime series.”